Guest Post by Rose Marie Machario, Author of The Amulet of Elements (Majick of the Chosen Ones, Book 1) ~ @witchgypsyrose @TCMPublicity 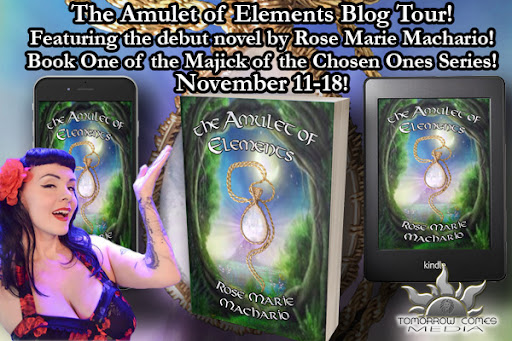 Please welcome Rose Marie Machario to the blog today!!! She is going to talk about her column, Dream Big.

All about Dream Big…

Dream Big began as a column, my journal so to speak. I wrote it originally as a guest spot on another online magazine, until it was time to move it to my own recently constructed website. I wrote the column weekly, writing about what I was doing to achieve my dreams. It was almost a personal public diary most of the time about how I felt about the things that I did, or was in fact trying to achieve, such as getting my manuscript published, becoming an actress, and modeling. After a period of time I thought it would be pretty neat to include others in my column, and interview them. Others like myself who were either trying to achieve their dreams, or already had, but were still going to that next step. The next step was something that I was pondering as well.

First, I am a strong believer in that no dream is too big, or too small. I put my idea together with the help from my friends, and together we began filming the first season of Dream Big, (named after the column of course), where I interviewed local talent of all kinds to share their stories. I wasn’t sure if this concept would take off, but after the first entire season came out we had a lot of positive feedback. I wanted this show to inspire others who may have been too afraid to go after their own dreams, and it was something really close to my heart, since I too was still on my own journey.

To be honest, I was pretty nervous in creating the show, hosting it, booking the guests, and coming up with good questions that were unique to the individuals who were brave enough to go on camera and bare their soul to me. It is not easy to share a story of the struggles, the good and the bad with a total stranger, and for everyone out there in YouTube land to see.

The seasons came and went, the guests have come and gone, but the inspiration stays with you, and no matter what your dream is, even if you don’t have one. The talented people have put themselves out there, and shared these stories with us. Some have been returning guests of the span of four seasons, and when they have it is such a joy to hear what they’d achieved since being on the show previously. Over the years, I have given the show a few makeovers, the logos have changed, I ask way fewer questions, and I don’t have to rely on my notebook as I did the first two seasons. I have way more confidence in myself as a hostess, and can calm even the most nervous of guests so they are not frightened of being on camera.

Unfortunately, my team has changed over the four seasons, a few we have lost to the heavens, and others have simply just moved on to do what they dream. Today, I am proud to say that we will begin the next season with a new team, new producer with Outlander Media Network, a sister podcast called Dream Big Radio, a new logo,  and we will bring season five together stronger than ever. One thing will remain the same, is the inspiration that will come with the next generation of dreamers who are willing to share their stories with us, so we can always dream big. 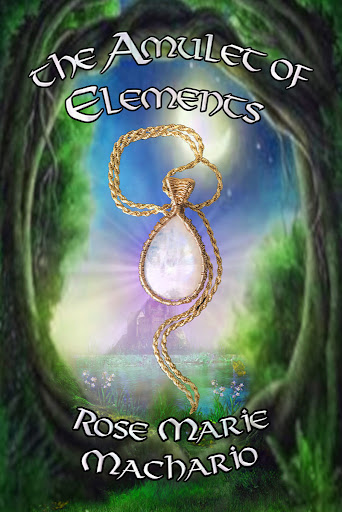 About The Amulet of Elements:

Princess Ellyria Rose found her special places in the books she read. Imagining herself in far off lands, she would dream of the knight who might rescue her one day from her dull, everyday life of needlepoint and lessons on becoming a lady.

Princess Ellyria Rose yearned for adventure and on her sixteenth birthday she got her wish, being rescued by the man of her dreams. Little did she know that would prove to be an adventure she did not expect to have.

Betrayed by the very man whom Princess Ellyria trusted, and left at the mercy of her father’s enemy, she had to use her wits to escape; along with the help of the very man who led her astray in the beginning.

Danger unfolds time and again, revealing an ancient story about a princess and a prophecy.

Links for The Amulet of Elements Print and eBook Editions: 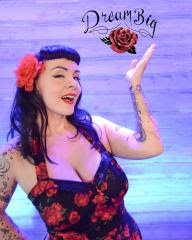 Rose Marie Machario is the creator and hostess of Dream Big. A show all about real people who are making their dreams come true.

When Rose is not inspiring others to follow their dreams, she is a nationally and internationally published pinup model, and a blossoming actress having worked in several featured, or principal roles. She has been seen in various television shows such as Ozark, The Originals, Nashville, Homicide Hunter, Killer Couples, Murder Chose Me, Murder Comes to Town, Snapped, #Murder, Justice by Any Means, Notorious, Fatal Attraction, Murder Mystery, Murder Decoded, and American Nightmare. Her movie credits include Tag, Super Fly, The Road Less Traveled, and The Last Movie Star.

Rose is also a published author of her debut fantasy novel, The Amulet of Elements. She also writes in the romance, and horror genres, and her column called Dream Big.

In her spare time she enjoys a daily routine of yoga, loves to cook, and cuddling up with her fur-babies while watching her favorite television shows, and movies.

11/18 She Leads he Reads https://femledfantasy.home.blog/ Review