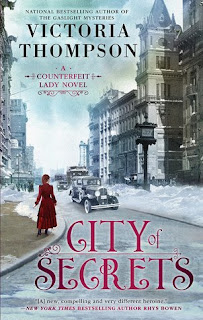 Con artist Elizabeth Miles has determined that Society is the biggest con of all. So far, Elizabeth’s only real social success has been with Priscilla Knight. Priscilla is a dedicated suffragist who was recently widowed for the second time in her young life. Her beloved first husband, DeForrest Jenks, died in a tragic accident and left her with two young daughters and a comfortable fortune. Soon after his death, her pastor convinced her she needed a man to look after her. Before she knew it, he had engineered a whirlwind courtship and hasty marriage to fellow parishioner Endicott Knight. Less than nine months later, Endicott is also dead in a somewhat less tragic and even more suspicious accident.

Priscilla confides to Elizabeth that she had understood Endicott was wealthy in his own right, and she had brought a sizeable fortune to the marriage as well. Now her banker is telling her she has hardly any money left and that her house has been mortgaged. The banker has hinted at a scandal that could damage the family’s reputation and her daughters’ future prospects. Fearing destructive gossip, Priscilla doesn’t know whom to trust.

Elizabeth discovers some unsavory evidence that seems to point to the possibility that Endicott’s death may have been connected to blackmail. To save her new friend’s future, Elizabeth must use her special set of skills to find the truth.

City of Secrets by Victoria Thompson
My rating: 5 of 5 stars

City of Secrets is the second book in the Counterfeit Lady series by Victoria Thompson. Elizabeth, our heroine, is a con artist trying to settle down with an honest lawyer. When a church patron named Priscilla Knight reveals that she doesn’t know why she married her now-deceased second husband and that she doesn’t remember anything about the wedding ceremony, Elizabeth smells a rat. Determined to get to the bottom of the mystery, Elizabeth and Gideon, embark on a case that involves lies, deception, and most of all, secrets. What follows is an investigation involving brothels, blackmail, and the potential to release information that could cause a huge scandal. Elizabeth relies on her family’s set of unique talents to try and make the wrongs done to Priscilla right but at what could be a terrible expense for Elizabeth and Gideon.

City of Secrets is a wonderful book filled with realism and emotion from start to finish. The author’s world building in the book is vivid and descriptive. The author did a great job with the continued character development in City of Secrets. Elizabeth is s a strong character but you must be if the art of the long con is your way of living. She’s also compassionate especially towards Priscilla Knight and her situation. It is easy to identify with Elizabeth, feel her emotions and the emotions of others, and fit right into the story. All the characters were written well, and I enjoyed each one of them.

This book is rich in emotional content and I was engaged in the story from the very beginning. The story is fast paced and truly set up and executed well. I can’t wait to see what the author has instore for Elizabeth next.