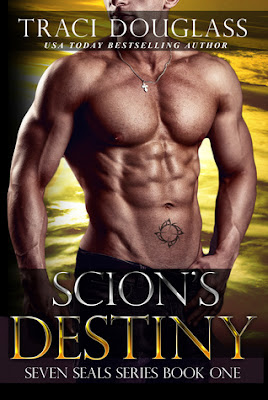 From a USA Today Bestselling author comes a divinely steamy new paranormal romance series featuring the Scion--a brotherhood of hella sexy heavenly warriors on a mission to save the world--and their destined mates--from ultimate destruction.

Love Conquers All, but can it stop the apocalypse?

After centuries of lonely, faithful service in the heavenly realms, Kagan is tired of watching the world go by from the sidelines. He longs for an earthly mission, to break free and feel the wind on his face, but he cannot leave his eternal Scion duty--to guard the mortal host of the first Seal of the Apocalypse. But when he senses a new call, he seizes his chance for freedom, only to discover the summons came from the very woman he's sworn to protect, a woman who awakens in him the long-dormant, darkest desires of his heart.

Mira Herald is shocked when a gorgeous, buff Adonis shows up at the bar where she works in Chicago, claiming to be a legendary, immortal Scion sent to protect her and carry out the vengeance she craves against her cheating ex. But when the attraction to her handsome guardian grows too strong to resist, and her ex turns out to be far more dangerous than she ever expected, can Mira believe in Kagan and what they have together, no matter the cost?

***This book contains characters originally featured in the book Seal of Destiny, which is no longer available. The story has been completely updated, edited, and reimagined for 2018, though some of the basic elements are the same.***

Scion's Destiny by Traci Douglass
My rating: 4 of 5 stars

Scion's Destiny is a breath of fresh air in terms of ideas, plot, and character interactions. This is not the same ol' same ol' paranormal romance. I enjoyed the Scion concept and the idea that the first Seal of the Apocalypse is tucked away inside a human host.

Kagan and Mira have terrific chemistry and believable interactions. These two characters are wonderfully matched and the author did a great job with them. Kagan is fierce protector but not in the caveman-hit-them-over-the-head-and-drag-them-back-to-the-cave way. Mira is strong and very capable, not needing Kagan for the most part, but accepting him. They make a great team.

The world building and character development created a story filled with vibrancy, action, and wonderful characters. The pacing was fast, leaving the reader no time to find the story boring. I was engaged in the story from the beginning and am glad I took the time to sit down and read Scion's Destiny. The book is fun, steamy, and filled with interesting characters and dialogue. The author's unique take on the seals of the apocalypse made this book a very enjoyable read without breaking into extreme religiousness that sometimes accompanies books featuring anything biblical.

I enjoyed this book very much and look forward to grabbing book 2.