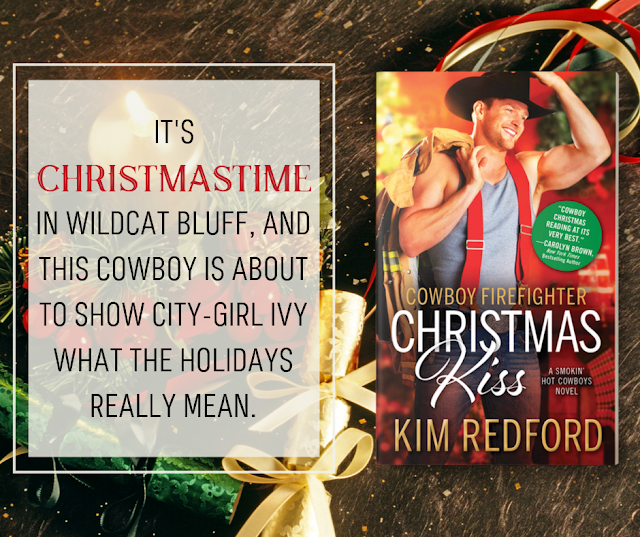 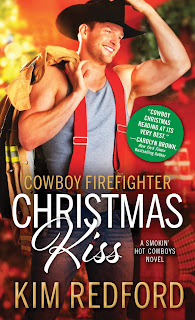 When Ivy Bryant arrives in town to run the historic honkytonk, she finds herself immersed in traditions that can’t be bucked. Luckily, cowboy firefighter Slade Steele has an idea to increase both the honkytonk’s income, and his own. It’s an offer Ivy couldn’t refuse, even if the passion between them wasn’t already reaching the boiling point.

Ivy and Slade’s love story is legendary—when you add in arsonist cattle rustlers, a runaway Angus bull, and a chili recipe that includes liquor AND chocolate, Wildcat Bluffs will be celebrating a cowboy Christmas unlike any other.

“Redford reels you in with this hot-as-hell firefighting cowboy.”—Fresh Fiction for Blazing Hot Cowboy

“Will keep you warm and toasty and entertained.”—USA Today Happily Ever After for A Cowboy Firefighter for Christmas

As Ivy Bryant stood on her tiptoes with arms raised to toss decorative tinsel over deer antlers on the wall above her head, she heard the side door that led to the Wildcat Hall’s beer garden open and boots hit the floor with a determined stride.
“We’re closed!” she hollered, not bothering to look over her shoulder. “Come back next week.”
“You look like you could use a little help,” a man said.
She froze with her hands in the air as she felt the deep male voice with that melodic, slow cadence of a born-and-bred Texan strike her body and go deep, as if she’d been pierced by a flaming arrow. Talk about red-hot. She tried to shrug off the heat, but the chair shifted under her, making her sway.
“Easy does it,” he said. “Chairs have a way of pretending they’re bulls sometimes.”
“Bulls?” She didn’t know whether to laugh at the joke or appreciate he’d tried to make her feel better about almost toppling to the floor. Still and all, if she’d known she was going to have company, she’d have put on something besides formfitting yoga pants and top in hot pink with black trim. He was getting an eyeful.
“In my case, I always tried to pretend bulls were chairs.”
“How’d that work out?” She eyed the antlers, mind half on her next throw and half on the amusing man behind her.
“About like you can imagine.” He sighed, as if life had been unfair. “I finally had to give up bulls for chairs.”
“I bet the bulls were grateful.” She definitely wanted to see the face that went with the voice, but she wanted to finish her task more.
“Yeah…but I’ve broken a few chairs.”
“Maybe even one of the chairs here in the honkytonk.”
“Might be. Looks like your chair is keeping an uneasy peace with the floor
“That’s one way of putting it.” She rose to her tiptoes again, trying one last time to get the tinsel to disobey the laws of gravity.
“Let me help.” He spanned her waist with large hands and lifted her so she could easily reach the antlers.
She caught her breath in surprise at his strength—and his boldness. But she wasn’t looking a gift horse in the mouth. She quickly twined the antlers with red tinsel until they looked festive for the holidays.
“Pretty,” he said.
She shivered in response. What had gotten into her? She should be struggling to get away. Instead, he was revving her up with his hot hands.
“Got any more tinsel to put up?” he asked in a deep voice gone husky. “I could hold you all day and into next week.”
“I suggest you put me down before you get into trouble.”
“If you’re the one handing out trouble, I’d wait in line to get it.”
She couldn’t help but chuckle because he was laying it on thick in that teasing way Texas men would do to get them out of problems with women. “Better put me down before your arms give out.”
“Not a chance. You’re light as a feather.”
She laughed harder. “Guess some women would fall for that one. What are you selling?”
“As a matter of fact, I’m here to help you, but you might consider it selling to you, too.” He gently set her down so her feet were steady on the floor, and then he stepped back.
She turned to face him—and felt her breath catch in her throat at the tall hunk of a cowboy. He wore pressed Wranglers that accentuated his long legs and narrow hips, with a wide leather belt sporting a huge rodeo belt buckle. His blue-and-white-striped, pearl-snap shirt tucked neatly into the waistband of his jeans emphasized the width of his shoulders and breadth of his chest. Blond haired. Blue eyed. Square jawed. Full lipped. He looked as if he’d been made to dazzle—and she was sud­denly and breathtakingly susceptible to every single one of his charms.
“Whatever you’re selling, I think I’m buying.” She spoke the words with a teasing lilt in her voice and a mischievous smile on her face. Still, she meant it. And he probably knew it because he was definitely heartbreaker material. How many women had already fallen to his charms and been left in the dust? She didn’t intend to be a notch on his belt, but if she’d known leaving the city for the country paid off so well in eye candy, she might’ve followed her sister sooner.
He chuckled at her words and held out his hand with a thick, muscular wrist that came from controlling thousand-pound-plus animals. “Slade Steele. If you haven’t heard of me, maybe you’re aware of the Chuckwagon Café and Steele Trap Ranch. Family businesses. I’m not just any guy off the street.”
“You’re definitely not just any guy.” She slipped her hand into his big one and felt him gently enclose her fingers. “Smart guy to throw a few compliments my way. Guess you’re more than a pretty face.” She tried to keep the teasing going, so their interaction stayed on a light note, but he was still holding her hand and she wasn’t pulling away and his eyes were heating up to a blazing blue fire.
“Nothing but the truth.”
“My sister Fern is the star.” She tried to tug her hand away, but he held on another long moment, nodding as if deciding something or conveying something or accepting something before finally letting go.
He grinned with a gleam in his eyes, revealing teeth white against the tan of his skin. “Yeah, she is that…but you make the earth move.”
“Oh my.” She returned his grin while fanning her face with one hand in that old Southern way, as if he was too hot to handle. “You really do want to sell me something, don’t you?”
“How am I doing?”
“Not bad.”