The supernatural elements in The Coronation.

I enjoy writing about supernatural/fantasy elements. They lend the story an added dimension, an extra lift, a sense of the unusual, the uncanny, the barely understood.
I dislike the term fantasy, because I try to endow my characters with experiences that are what you might call paranormal, dreams, visions, clairvoyance, E.S.P., and things of this kind.
I also try to introduce these supernatural elements in such as way as to make them as believable as possible, so that they integrate as fully as possible into the character’s arc and the plot threads. In the same way that when someone knocks or rings on the door, you know who it is before you open it.
The Coronation is set in Eastern Europe, specifically in East Prussia, a now-defunct Baltic state sandwiched between the modern states of Poland and Lithuania.
Eastern Europe is rich in folk lore custom, which is where I trawled for most of the supernatural elements in the plot. It was more a question of what of what to leave out than what to include.
During the Great Enlightenment, the previously-rigid shackles imposed by the Catholic Church were slowly being loosened, allowing the development of original philosophical and political ideas and the exploration of new scientific fields such as biology. Many of the seeds of our modern era were sown during the Great Enlightenment. The 1760s was a time when giants such as Jean-Jacques Rousseau, Voltaire, Adam Smith, Carl Linnaeus, Immanuel Kant, and James Watt bestrode the world.
Today we live in large urban conurbations with mass movements of people. The 18th Century saw the shift from the agrarian-based feudal society built around peasant workers and landowners (or Junkers as they were called in Prussia) to an industrial factory-based one with huge anonymous cities.
In those days, village people still retained a strong and binding relationship with the land on which they lived, expressed through folk customs, song and dance, poem and story, as well as festival and ceremony.
They conceived of folk like Til Eulenspiegel, a German peasant trickster, a character I explored in the novel (that’s him in the picture). He is pictured holding an owl and a mirror, which is how he derives his name. Eulenspiegel means Owl-Mirror 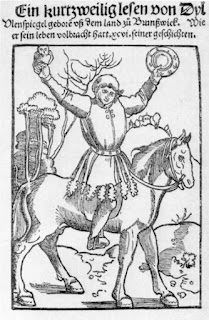 In Medieval times, there was a romance between the people and the land on which they lived – this was Arcadia. In Europe, this was the last time when this pastoral vision of harmony with nature was prevalent.
At the head of each chapter, I used sayings and proverbs from those times to provide an authentic voice.
Here’s a well-known proverb of the times:
“The maid who rises on May morn,
And washes in dew from the old oak tree,
Will forever after handsome be.”
Here’s another; this one’s from the Medieval poem, Annie of Tharaw.
“Through forests I'll follow and where the sea flows,
Through ice and through iron, through armies of foes,
Annie of Tharaw, my light and my sun,
The threads of our two lives are woven in one.”
Using the folklore and heraldry of the land of Prussia, which is redolent in the motif of the eagle, I conceived the idea of a supernatural entity, the Adler, and the part it would play in the development of the single most important event in modern times – the Industrial Revolution. The German word for eagle is adler. 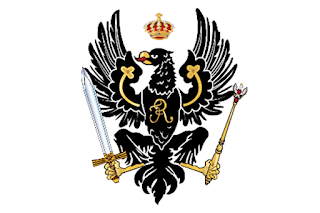 Here’s an image of the flag of the Kingdom of Prussia. It pictures the black eagle and relates to the Order of the Black Eagle, the highest East Prussian chivalric order. Its enigmatic motto is ‘Suum Quique’, meaning ‘To each his own’.
As well as telling the story of this exciting, changing time, I wanted to provide an alternative genesis for the Industrial Revolution, and suggest why we live in a world so reliant on technology.
Welcome to the supernatural/fantasy world of The Coronation.
Justin Newland
10th November 2022. 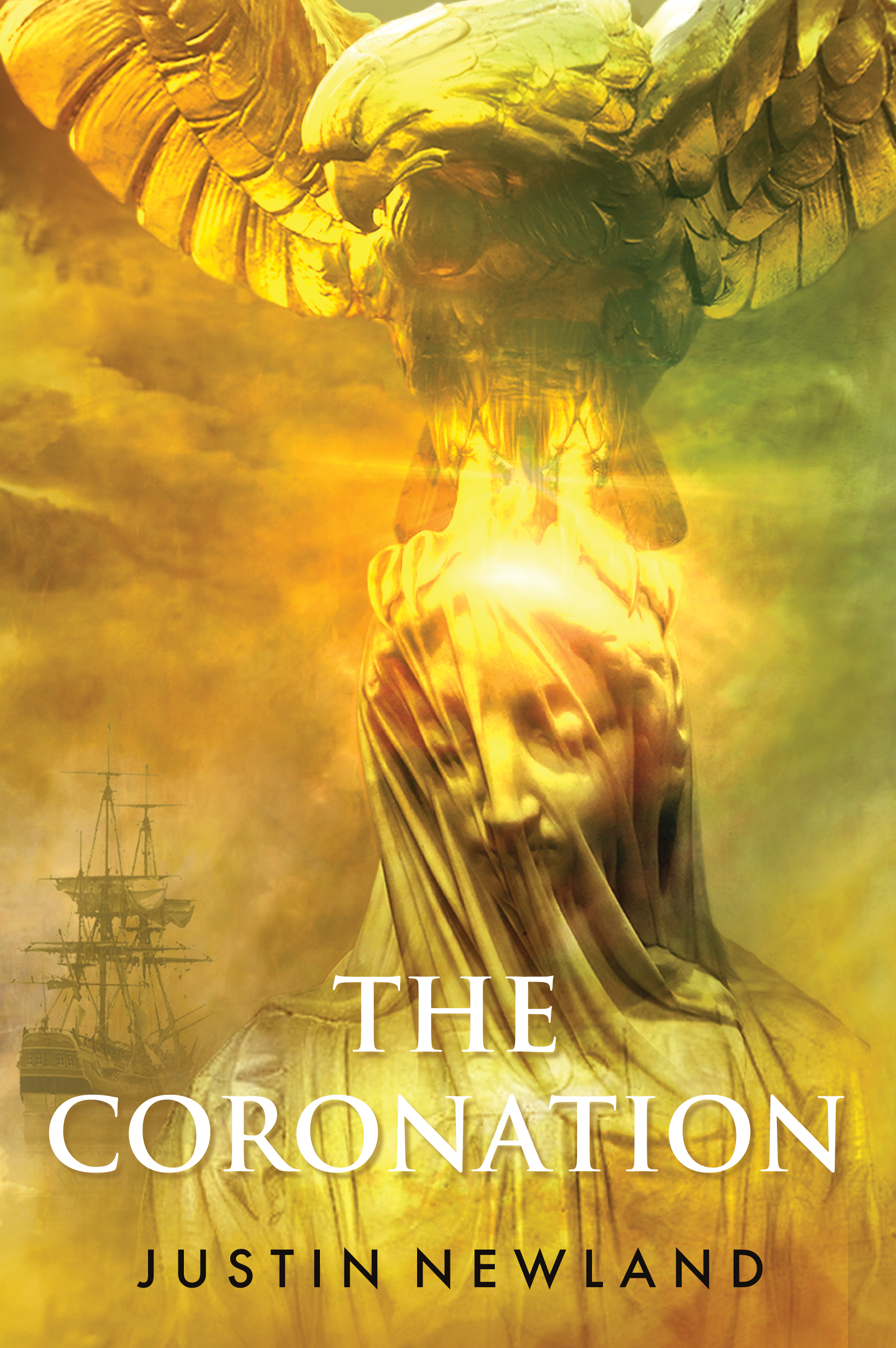 The Coronation by Justin Newland

It is 1761. Prussia is at war with Russia and Austria.

As the Russian army occupies East Prussia, King Frederick the Great and his men fight hard to win back their homeland.

In Ludwigshain, a Junker estate in East Prussia, Countess Marion von Adler celebrates an exceptional harvest. But it is requisitioned by Russian troops. When Marion tries to stop them, a Russian captain strikes her. His lieutenant, Ian Fermor, defends Marion’s honour and is stabbed for his insubordination. Abandoned by the Russians, Fermor becomes a divisive figure on the estate.

Close to death, Fermor dreams of the Adler, a numinous eagle entity, whose territory extends across the lands of Northern Europe and which is mysteriously connected to the Enlightenment. What happens next will change of the course of human history… 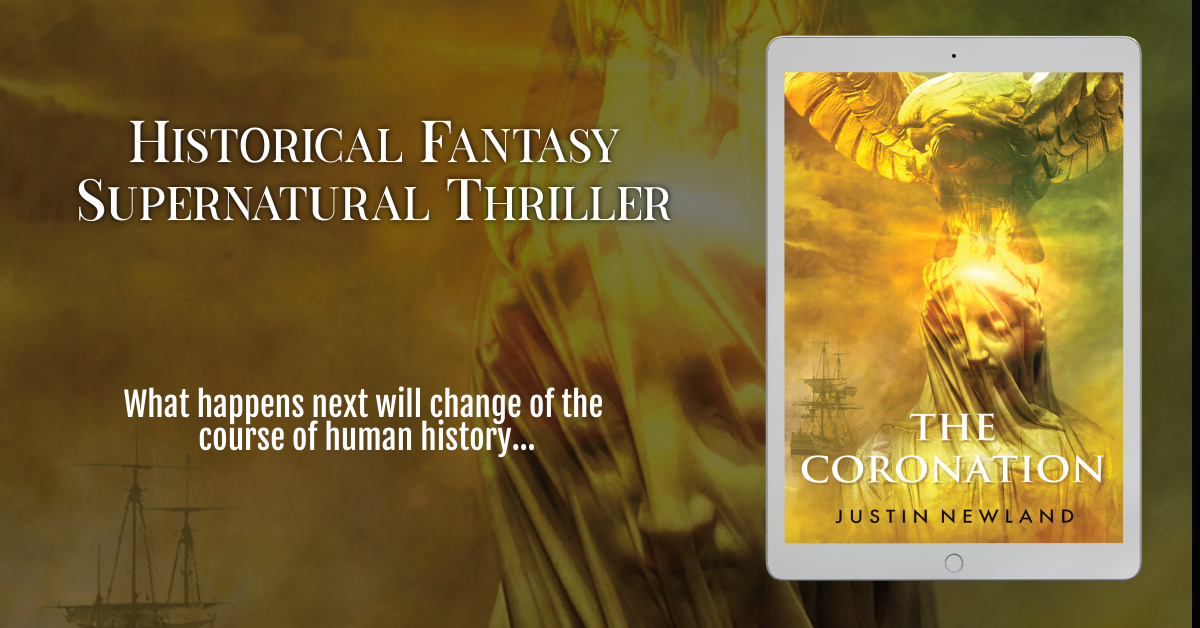 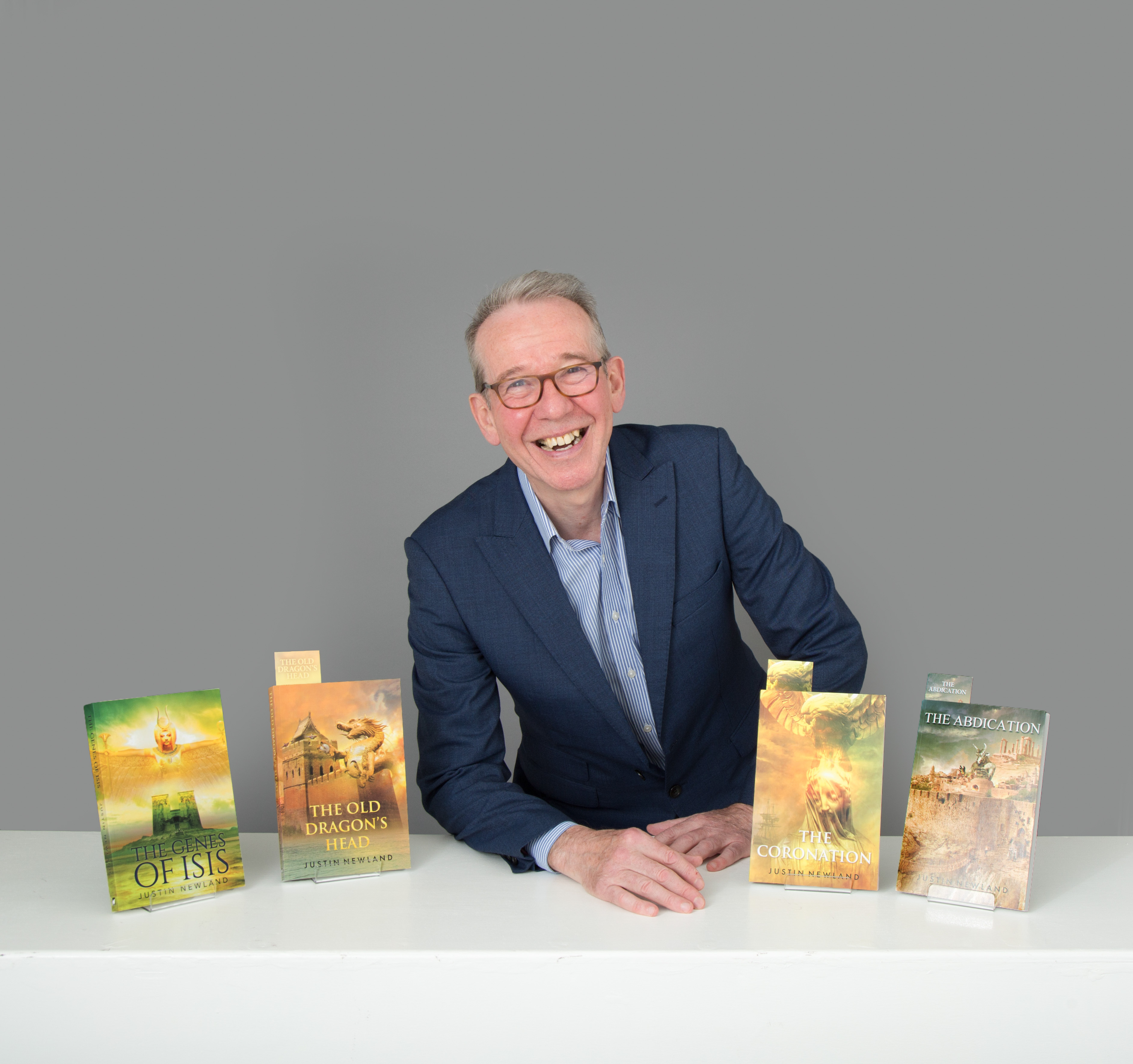 Justin Newland is an author of historical fantasy and secret history thrillers – that’s history with a supernatural twist. His historical novels feature known events and real people from the past, which are re-told and examined through the lens of the supernatural.

His novels speculate on the human condition and explore the fundamental questions of our existence. As a species, as Homo sapiens sapiens – that’s man the twice-wise – how are we doing so far? Where is mankind’s spiritual home? What does it look or feel like? Would we recognise it if we saw it?

Undeterred by the award of a Doctorate in Mathematics from Imperial College, London, he found his way to the creative keyboard and conceived his debut novel, The Genes of Isis (Matador, 2018), an epic fantasy set under Ancient Egyptian skies.

His third novel, The Coronation (Matador, 2019), speculates on the genesis of the most important event of the modern world – the Industrial Revolution.

His fourth, The Abdication (Matador, 2021), is a supernatural thriller in which a young woman confronts her faith in a higher purpose and what it means to abdicate that faith.

His stories add a touch of the supernatural to history and deal with the themes of war, religion, evolution and the human’s place in the universe.

He was born three days before the end of 1953 and lives with his partner in plain sight of the Mendip Hills in Somerset, England.

Author’s Website (where buyers can enter a dedication to be signed by the author):