Book Spotlight ~ Beyond Atlantis: An Epic of The Ancient Americas by Lucius Beauchamp ~ Fiction, Fantasy, Adventure 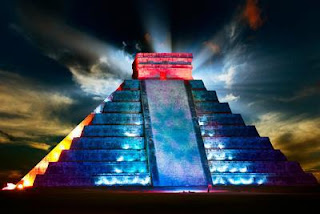 “‘It’s been five days. I expected word within one!’

‘May I remind you, Galen, that you’re not speaking to a lackey now?’ He tutted, ‘You sound emotional dear boy. I have a herb growing outside...’

Galen stiffened. ‘When do I meet her?’

‘Why this unseemly impatience, my fledgling archpriest? You can’t be experiencing adolescence this late in life, surely.’

The librarian’s attention became diverted, as glowing fireflies sauntered in through one window and out through another.

Torim gave his companion an amused look. ‘Right now, if you stay where you are.’ Galen was puzzled for a second and then he, too, heard Zithia’s tread on the stones outside. ‘Your robes, are they quite in keeping with the image you wish to convey?’

Torim turned to the doorway. ‘Zithia.’ Galen closed his eyes, breathing deeply. For him, the very air was intoxicated by her presence.

Zithia opened a palm leaf, to reveal apricot coral that was a mushroom. ‘From the high priests’ table.’

Zithia looked into the garden below, where myriad firefly glows had created a fairyland. Tantalisingly Torim waved a papyrus concertina scroll, tied with blue ribbon. ‘Poems from Atlantis.’ She came to him, but he held the paper bark beyond her reach. ‘Its words deserve a better surrounding than this.’ Zithia’s eyes lit up. ‘I’ve forgotten the last time I fished on Lake Quetomem.’ Behind the shelves Galen frowned.”

In summary, Galen is a complex person, an alpha male of many layers. Proud, powerful, trying to stay on the right side of karma, and getting ahead. He has one weakness which Galen is determined won’t scupper his plans for his life. And Galen’s plans have always been of the most ambitious. Considering his talents, temple political finesse and connections, plus no qualms about using those contacts, his future all seems rosy. Galen is even given to calling in markers, on occasion, to achieve his objectives. What would you think of his chances of having it all? 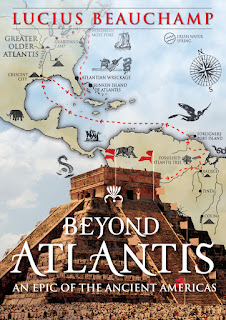 Beyond Atlantis: An Epic of The Ancient Americas
Lucius Beauchamp
Genre: Fiction, Fantasy, Adventure
ISBN: Paperback 978-0-6488929-0-8
ISBN: E-book 978-0-6488929-1-5
ASIN: 0648892905
ASIN: B01I4OMBVY
Number of pages: 448
Word Count: 158,240
Cover Artist: Flametree Creative
Tagline: Greater Atlantis, where The Guardian Tribe roam
About the Book:
10,000 years ago, ancient Atlantian Tribes of magicians flourished in the lower Americas and along the Mississippi.
Galen, an Atlantian magician priest is locked in a relentless power struggle with an envious sorceress who blackmails, lies, and manipulates. A prince of the blood, Galen is determined that nothing will stop his becoming an Archpriest.
Eten, blackest witch and high priestess sees angels and seeks a forbidden treasure. She finds Galen’s curse of having a soulmate particularly helpful.
Half a millennia ago the Island of Atlantis sank off the Biminis, the 13th Tribe was held responsible for the demise of Atlantis. The surviving Atlantians stripped the 13th of all technology and exiled them.
Vengeful, the 13th Tribe wishes to return but the 13th’s warlocks fear crossing into Greater Older Atlantis. They do not dare set foot on the Guardian-protected land. The great Guardian Tribe possess a formidable circle of psychics who roam North America keeping constant vigil to keep Greater Older Atlantis safe for all Atlantians.
Purchase from Amazon https://amzn.to/3CVqnyi
Read an Excerpt:

With lightning rushing to greet the barbarians, not only sulphur made their guts wrench. That most feared God, the God of lightning, was among them. Sheets of power forked across the ground, felling dozens of the pure race. Repeatedly, the riverbed exploded and sprayed molten sand. Dripping glass sculptures remained and pressure waves threw barbarians into the glowing glass pools. Where some lay stuck, in death or dying.
The false day reached the refugees, the sky pulsing green. From the Safety of the hillside they saw it all, with deafening thunder rocking them. Dodging lightning bolts, the barbarians ran when they could to slid into super-hot streams of glass where their flesh seared so completely that bare-bones were exposed among living tissue. There was screaming at newly blackened limbs and sizzling holes within a shoulder or thigh, created by actual lightning strikes. And then more astral screams as the black shadows of the underworld chased and fell upon the freshly dead. Only a handful survived. It was another mist-night.
*
Tancah. Ten ships comprising another fleet had landed. Gold. Mounds of gold was being turned into ingots for shipment to the Far World.
The gangplanks were sunk into the pink sand by the tread of disembarking
warriors.
The scarred pyramids were towers with large stone tablets standing
on top. Not very wide, with ladder-like stairs, each had an almost sheer
drop at the back. Saplings burst forth in unexpected places among the ruins.
The seventh ship to dock was grander than the others. Its occupants always liked to be seventh, from superstition. Rhaim, the commander-in-chief hurried to meet these new arrivals. They were the main reason he’d come back to Tancah. After all, he didn’t want their leader to take offense. In black clothing with wide purple edging, the thirteen glided down the gangplank. Weary soldiers made hasty signs in the group’s direction while dropping their eyes. Even with a close trimmed mustache, the outlines of the first face were a death mask. Udo, the leader. Tall, white-haired and eyes robin’s-egg blue. The whole group was from similar molds.
Not on land yet, Udo glanced at Tancah. A connoisseur, he breathed
deeply of the destruction. Then he put a foot hard on the sand and dogs began to howl. A flock of monarch butterflies, resting on their way to their wintering ground, filled the air. Raising his hand to the sky, Udo cut a swath through the gossamer wings. The lovelies rained down among the pyramids, while the coven roared with laughter.
Invisible to everyone, a watcher hovered over the beach within sight of the ships. As one, the black-garbed group turned to look at him, eyes burning. Languidly, Udo said, ‘Kill.’
Two men vacated their flesh so utterly that their bodies fell to the ground. Their spirits were shadow hounds. Instantly the temple flyer telepathed the sight to his temple, then spirit claws were on him. Dying, screams filled the heads of other flyers.
The murdered watcher’s body, seated in the temple chamber, spasmed and went limp. A high priest wiped the corpse’s brow, ‘Where is the other?’
Simultaneously, Udo’s face was in the room, hanging in mid-space.
Gloating, he disappeared. Then he was back at the beachfront. ‘Find the other watched.’
The two dark hounds pounced forward, but Udo’s snarl sent them scurrying into their bodies. He believed in sharing and signaled a fresh pair.

Like Plato, Lucius believed Atlantis existed. Interpreting Plato's description of location, backed up by Edgar Cayce's readings, the Island of Atlantis was off the Biminis. Therefore, for him, the Continent of Atlantis (Greater Older Atlantis) was North America.
https://amzn.to/306KpYz 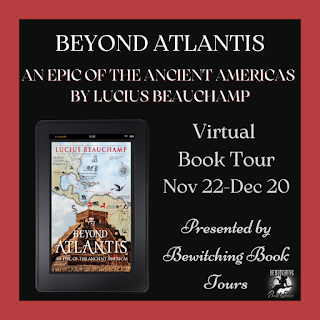