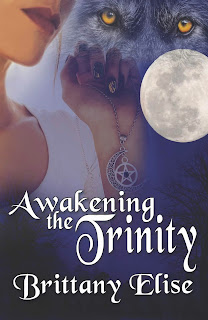 In the seventeenth-century, an all-powerful witch called Rionach the Dark ruled the Celtic nations with an army of enslaved werewolves. In order to restore balance between Light and Dark, the Trinity of Light was summoned to vanquish the Dark Witch and end the Battle of the Dark Ages.

Seventeen-year-old Quinn Callaghan lives in the small, rustic town of Silver Mountain. Its location may be rural, but it is home to an ancient pine forest that surrounds a supernatural hotspot–a nexus of raw and powerful energy.

When a charismatic witch from Ireland, and a mysterious guy with a secret of his own are drawn to the area, Quinn finds out that she inherited her rare abilities from a revered ancestor. Could it be that she shares a bloodline with the Original Trinity? Nearly 300 years later, the Darkness is returning to Silver Mountain, and the Trinity must stop it.

I could feel the slow burn of Wren’s gaze from the side and knew he was watching me. He seemed to always be watching me, and I wondered what thoughts were circling through that pretty head of his. I looked up at him demurely. “What?”

“You’re watching me,” I stated.

“Do I make you uncomfortable?” He shifted toward me, hovering.

“I haven’t decided yet.” 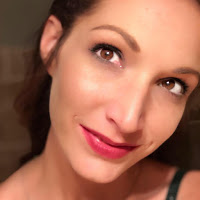 Brittany lives in Ohio with her husband, Benjamin, and their four-legged children. Brittany graduated from college with a degree in photography, and later became a canine obedience instructor. During the day, Brittany manages an FBO at a local hometown airport and services aircraft.


Awakening the Trinity is Brittany’s second book, and she is currently working on the sequel with hopes of turning it into a trilogy. Writing has always been her greatest passion. She enjoys the outdoors and exploring new places in an endless quest to keep that artistic inspiration burning. 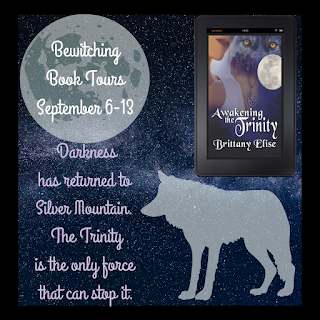