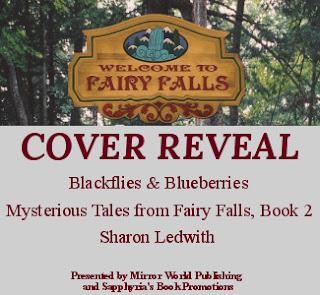 Through Hart’s psychic power, Diana gains hope for justice. Their investigation leads them into the corrupt world threatening Fairy Falls. To secure the town’s future, Hart and Diana must join forces to uncover the shocking truth, or they risk losing the true essence of Fairy Falls forever.

View the Cover at One of These Wonderful Sites:

Tales from the bayou
http://ritamonette.blogspot.com/2019/04/blackflies-and-blueberries-by-sharon.html

Sharon Ledwith: I came. I saw. I wrote.
http://sharonledwith.blogspot.com/2019/04/cover-reveal-blackflies-and-blueberries.html

Sloane Taylor: Sweet & Spicy...In and Out of the Kitchen
https://sloanetaylor.blogspot.com/