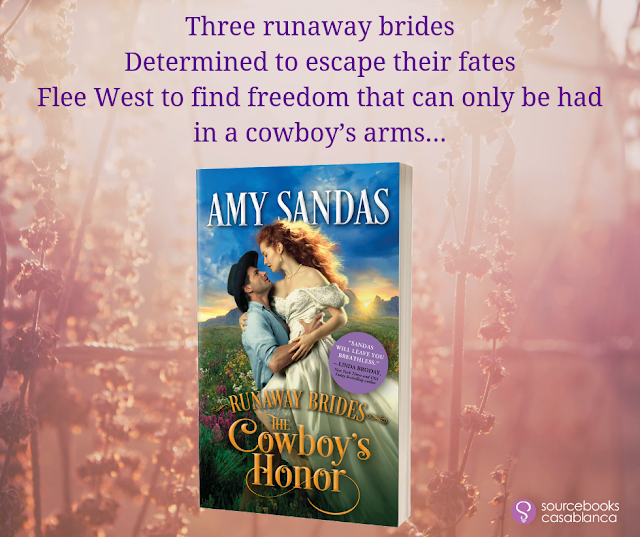 Determined to escape their fates

Courtney Adams never questioned the future her parents laid out for her…until the day she was to marry one of Boston’s elite. Desperate, she flees the church in a flurry of bridal finery and trades her pearls for a train ticket to Montana—only to be mistaken for a surly cowboy’s mail order bride!

Dean Lawton doesn’t want a wife—especially not some fancy Eastern lady he believes his brother “ordered” behind his back. Yet one mistake leads to another, and before the dust can settle, he finds himself married to a woman who challenges him at every step…and sets his wounded heart ablaze. But the clock is ticking on this marriage of inconvenience, and soon Dean must decide: convince Courtney to remain in his arms, or lose her light forever… 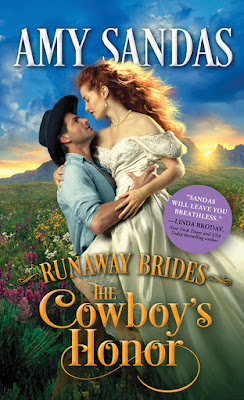 “Is there a hotel in town where I might procure a room for a few days?”

“Miss Mabel has a boardinghouse down the road, though I don’t know for sure if she’s got any open rooms.”

Courtney smiled her thanks to the postal clerk, already envisioning a quaint but comfortable room with clean sheets on the bed. Maybe even a hot, tasty meal. She had given up on finding food that was near the same quality she was accustomed to, but she would settle for edible and filling right now. She couldn’t very well expect a rugged town in the Western Territories to provide the same levels of comfort as a big city back East. She had left Boston in search of a new life. It was time to embrace all of what that meant.

As she stepped onto the boardwalk, blinking against the bright summer sunlight, Courtney didn’t realize she had stepped right into someone’s path until it was too late.

And of course, it had to be Mr. Martin.

What should have been just a very brief bumping of elbows and shoulders became much more when he took swift advantage of the encounter by wrapping his arms around her in an exaggerated and unnecessary attempt at steadying her.

Courtney immediately put her hands up to try to shove him away, but her efforts were ineffectual. He was intent on holding her close.

“It’s my lovely traveling companion,” he exclaimed. His face was so close that she could feel the heat of his breath on her cheek. “What a pleasure to run into you again so soon.”

“I would thank you to release me, sir.”

“Not yet, sweetheart. I never did get your name.”

“And you never will. Now let me go,” Courtney stated more forcefully. Her stomach turned in distress as she glanced around to see if there was anyone who might come to her aid.

Despite their low timbre, the words were spoken from behind her in such a hard and forceful tone that Mr. Martin’s grip around her waist loosened as though on command. She did not waste time in giving a solid push against his chest and wrenching free. She quickly backed away from Mr. Martin’s grabby reach, which brought her closer to her unknown rescuer.

Turning to acknowledge the man who had come to her aid, all she saw was the expanse of a broad male chest covered by a faded blue cotton shirt. The scents of horse and leather and sunbaked earth filled her nostrils. Distracted and still a little distressed, she felt her foot catch in the twisted length of her skirts on her next step, and she started to stumble. Warm, rough, capable hands grasped her arms as the stranger held her secure until she regained her balance. A low sound escaped the man’s throat as his hands dropped away.

“My apologies,” he muttered as he stepped back from her. The velvety texture of his voice soothed and flustered at the same time.

Courtney took a deep breath, trying to regain her composure after the discomfiting experience of being handled so familiarly first by Mr. Martin and then by the tall stranger. She wasn’t used to such treatment…but while Mr. Martin’s assistance had caused only irritation, this stranger certainly deserved her thanks. She corrected her posture and made sure her expression was perfectly neutral before she lifted her chin, prepared to utter a swift expression of gratitude.

The words never made it past her lips.

The man stood a few inches taller than her and wore a wide-brimmed cowboy hat that blocked the sun, giving her an unimpeded look at one of the most handsome faces she had ever seen.

His skin was bronzed from exposure to the sun, and a hint of sandy-brown beard shadowed a hard jawline and square chin. Though his mouth was pressed into a firm line, it didn’t disguise the masculine beauty of his arched lips beneath a well-shaped nose and strong cheekbones. His features were put together in a way that was rugged yet undeniably attractive.

But his eyes—pale blue like a summer sky brushed with wispy clouds—were what had given her the intense little shock of awareness. It was like being woken up from a hazy dream. Everything just suddenly became more vivid, more…awake. His gaze held a hint of impatience as he looked down at her from beneath a furrowed brow.

While she stood dumbfounded, he swept his stunning gaze over her person.

His hard expression tensed even more as he took in the sight of her elaborate wedding gown before finally returning to her face. Only now, instead of impatience, she saw the glimmer of something more in his eyes.

She had to consciously tell herself not to react to the way he eyed her so openly. Keeping her expression calm and unruffled under this man’s intense regard was not an easy task, especially now that she was dealing with strange little sparks that had ignited beneath her skin everywhere his gaze had fallen.

She was accustomed to inciting admiration in the gentlemen of her circles—she had been told she was beautiful often enough throughout her life to believe it was so. But she could not say she had ever inspired the flash of irritation she noted in his eyes when he finished his perusal.

He sent a focused glare toward the post office behind her before looking down at her once again. “You’ve gotta be kidding me,” he muttered, his smooth-textured voice a strange contradiction to his harsh visage.

He was scowling. At her.