You can’t escape the darkness Magnus Blackwell’s past is about to catch up with him.

An evil force has seized New Orleans. Pestilence, suffering, and darkness cloak the city. The citizens are scared and need their mambo to guide them, but Lexie Arden can’t help anyone. A diabolical presence has taken Lexie’s power and severed her ties with the other side.

Magnus Blackwell is fighting demons of his own. Torn between his devotion to Lexie and a spirit from his past, Magnus’s loyalty is put to the test. He must revisit his sins to uncover the key to the hatred ripping the city apart. If he doesn’t, Lexie’s reign as mambo will end.

Their search for answers leads them deep into the darker realms of voodoo—until a desperate Lexie does the unthinkable, and Magnus can do nothing to spare her from her fate.

Magnus waited outside the cottage, anxious for Lexie. Vulnerable because he was cut off from her. Something had changed between them. The thoughts, emotions, and even the actions of the living left impressions in his head. In the beginning, he’d only connected with Lexie; now it appeared as if every person he encountered touched him in some beguiling way.
Confounded by what was happening, he went to the green water at the swamps’ edge along the side of the house. Raindrops created ripples on the stagnant water. Their concentric circles grew, intersecting in swells, releasing voices in their wake.
Magnus waited at the slimy green bank, attempting to make sense of the strange sounds. The cries of men, women, and children rose up and overwhelmed him.
“Save us!” a woman shrieked.
“Please, help me. I want to be free,” a man’s husky voice entreated.
“Take me away from this hell,” a high-pitched wail begged.
The voices built around him, crowding his ears, imploring him to rescue their tormented souls. He had never heard such noises from anyone.
A vision of his Frannie hurtling over the cliff’s edge at Altmover Manor replayed in his head. The sound she made as she toppled to the rocks below resembled the pitiful cries of the spirits around him. Magnus closed his eyes, disgusted by the memory.
When his eyes opened, he scampered backward. In the boggy water, hundreds of bodies floated in various stages of decomposition. Arms, hands, legs, and torsos bobbed on the surface. The woman in black he’d seen with Lexie stood at the water’s edge, calling to the dead to wake from their soggy tombs.
Horrified by the agony he saw on their contorted faces, Magnus wanted to obliterate the vision by returning to his shadowy realm, but he couldn’t tear himself away. The images of body parts and broken souls held him captive as bitter waves of anger and anguish rolled off the water.
“Your master’s in danger.”
Magnus spun around.
A little girl in a long white nightgown trimmed in yellow ribbon stood next to him. Down the front, a stain of burnt red went all the way to her bare feet. She held a dirty teddy bear in her arms, but when she peered up at him, a gaping wound across her throat exposed the bone underneath.
Magnus didn’t know if he could believe the phantom before him. Spirits had never reached out to him before. This was Lexie’s realm. Why did he suddenly have her gift?
“Are you real?”
“Yes, sir. Very real, just like you.”
He knelt down beside the child. “What is your name?”
“Mattie. I died in the swamp when I was six. The mistress has enslaved my soul to do her bidding.”
He touched the nose of the teddy bear in her arms. His fingers passed through the toy. “What mistress?”
“The Lady La Fay. The one who called your master to her side.”
Magnus examined her gray skin and sunken eyes. “I don’t have a master.”
She pointed to the porch steps of the cottage. “You’re bound to the woman who went inside. She’s your master and the one who controls your fate. We are all bound to those who work the dark realm. You’ll see.”
Magnus was about to question the child when her eyes went black and rolled back into her head.
Her mouth opened, and her lips stretched, expanding painfully beyond her chin and cheeks. The gaping, black hole spread and almost split her face in two. It covered her entire face, leaving only her flowing brown hair untouched.
Alarmed, he stood up. Then the child dropped the teddy bear and held her arms out to her sides.
He searched the swamps for an escape. He found the souls in the water, their dismembered bodies rising from the surface, coming toward him. A parade of legs, arms, torsos, and heads covered with algae and muck approached his spot on the shore.
He faced the girl, her toes floating above the boggy ground.
A soulless, wretched cackle came from the blackness covering her face.
“Welcome, Magnus Blackwell,” a woman’s whiny voice echoed from the darkness. “Welcome to my world.” 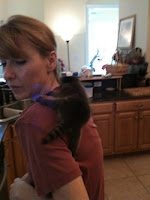 Born and raised in New Orleans, Alexandrea Weis grew up in the motion picture industry and began writing at the age of eight. After finishing her Ph.D. in Nursing, Alexandrea decided to pick up the pen again. She has published a number of award-winning novels, and won countless national awards for fiction. A certified/permitted wildlife rehabber with the La. Wildlife and Fisheries, when not writing, Alexandrea rescues orphaned and injured wildlife. She and her husband live in New Orleans. 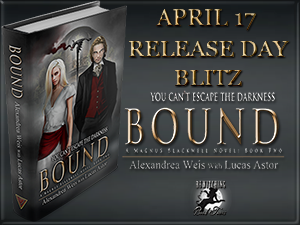