If Only They’d Known…You Can’t Burn A Witch. 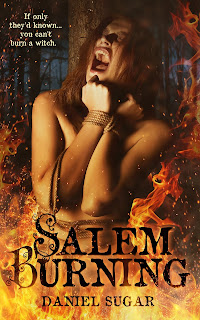 Salem Burning, a magical re-telling of the Salem witch trials, is now available exclusively on Amazon.

In 1692, disreputable Kyle Edwards breaks his engagement by accusing his fiancee, Lilly Parris, of witchcraft.

Kyle is a liar - he does not really believe in witchcraft, he is simply trying to get rid of Lilly. But Kyle is in for a shock because, as it turns out, Lilly really is a witch.

“Salem Burning is a fast-paced, brand-new take on the Salem witch trials.

The late-afternoon sun was slipping away and storm clouds and darkness were rapidly approaching as the happy eight-year-old girl carrying a straw basket filled with freshly-cut roses ran towards Delaney Castle.

Suddenly out of breath, Sarah Delaney stopped, sat down on the soft green grass and looked at her home. Delaney Castle was truly beautiful. Its stone walls and turrets so white they almost shimmered in the rapidly setting sun. It was hard to believe that a magnificent castle perched on top of a hill was actually her home. Hers! How lucky she was to live there and how blessed she was to have such wonderful parents. Parents who loved her so much they were making a magnificent birthday party for her that very evening. Overcome with happiness, Sarah could not help herself and as she stood up and ran into the castle she started to sing. “The birth day is the loveliest day. The birth day is filled with charm.”

Sarah’s beautiful, dark-haired mother, Evelyn Delaney, was clad in a breathtaking saffron gown and she was waiting for her daughter as Sarah ran into the castle.

Evelyn smiled, lifted a rose from Sarah’s straw basket and inhaled the flower’s scent. “Come along, Sarah. Everyone wants to see the birthday girl.”

Sarah kissed her mother on the cheek and said, “I am ready, mother.”

Sarah took her mother’s hand and together they walked into an enormous dining hall which was filled with relatives and friends who began to clap and cheer the moment Sarah entered the room.

Sarah scanned the room. The crowd was thick. There were so many people, too many people - but she only wanted one of them. Yet she could not find him. It was so frustrating. Where was he? Where was he? Suddenly she spotted him – her tall, handsome, blond father, Patrick Delaney, (clad in his finest tartan kilt and a velvet jacket). Sarah rushed into her father’s arms and he laughed and tossed her playfully into the air as Sarah squealed with delight. “Now we eat!” Patrick yelled. “Now we sing and dance as we let it be known to all that eight years ago, on the first of June, fifteen hundred and forty-two, my daughter, this young beauty named Sarah Delaney, was born in Scotland!”

The assembled guests cheered and, as if by magic, servants suddenly appeared in the vast dining hall, some carrying trays of food, some holding musical instruments which they began to play.

Delighted, the guests began to eat and sing and dance to the lively music which was almost drowned out by the sound of approaching thunder.

Sarah took her parents’ hands and the three of them sang along with their guests; raising their voices as the sounds of distant thunder grew closer and louder.

Suddenly, thunder exploded overhead, cold, impenetrable sheets of rain dropped from the black sky and long branches of lightning illuminated the castle as soldiers rushed into the dining hall with swords drawn.

Sarah Delaney screamed as a soldier cut off her father’s head.

Evelyn Delaney grabbed her terrified daughter and ran to the large portrait of Patrick Delaney that hung on one of the dining hall’s stone walls.

Soldiers ignored all cries for mercy and massacred the party guests, savagely, brutally, sparing no one.

Evelyn quickly kissed her daughter. “Hurry now, Sarah. Save yourself.”

Suddenly, a soldier drove his sword into Evelyn’s chest and Sarah, still clutching the basket of roses rushed down the dark stone passageway.

The soldier pulled the sword from Evelyn’s chest and then plunged it into her throat.

The moment Evelyn Delaney fell to the ground, dead, the soldier turned his attention to Sarah and rushed into the stone passageway.

As Sarah ran, she turned and looked behind her. The soldier was too fast. She was running with all her might but the soldier was getting closer.

A bright white flash of lightning illuminated the end of the passageway; illuminated freedom.

Sarah, exhausted, managed to squeeze through the passageway’s narrow opening just as the soldier lunged and tried to grab her.

The soldier was able to grab Sarah’s left shoe and tear if off her foot but Sarah was suddenly free.

The soldier was unable to fit through the passageway’s narrow opening and he screamed and swore and waved the child’s raw leather shoe as Sarah Delaney ran and ran and disappeared into the wet Scottish night. 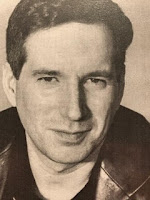 Daniel Sugar has written for a number of celebrities and for several TV shows, including “The Tonight Show, With Jay Leno”. He has always been fascinated by witches, witchcraft, the Salem witch trials, and the French Revolution. “Salem Burning” is his first novel. He is currently working on the sequel, “The Witch And The Guillotine”. 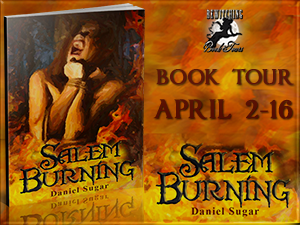