Happy Release Day and a Q&A with Loreth Anne White, Author of In the Dark ~ @Loreth ~ #Mystery #Thriller #Montlake ~ #Giveaway 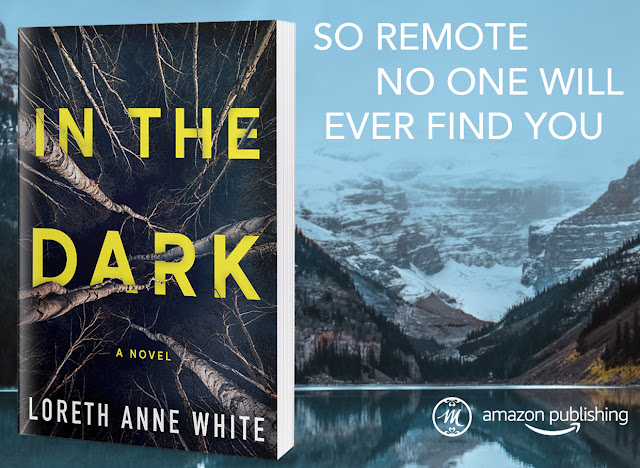 1. You are very well known for your romantic suspense tales, but your new title, IN THE DARK, is all about mystery -- a real whodunit! Tell us a bit about the story.

I like to think there is still a strong echo of my earlier romantic suspense books that ripples through IN THE DARK. Yes, it’s a locked-room mystery/thriller -- wilderness style, but the mystery narrative is wrapped inside a romantic suspense-style narrative that follows a budding friendship between Detective Mason Deniaud and Search & Rescue manager Callie Sutton who must not only piece together what happened as they hunt for survivors, but also must race against time to save who might be left. The story leaves off with a promise of more ahead in the relationship between Callie and Mason, so my roots are still showing, I hope.

2. Your story definitely has shades of Agatha Christie as well as a nod or two to Stephen King. Did these authors act as inspirations for this book?

IN THE DARK is not only a homage to Agatha Christie’s AND THEN THERE WERE NONE, but Christie’s story becomes a plot device, a psychological tool that the villain uses to instill fear in the victims trapped in the lodge because the victims know what transpired in the book, and they anticipate the same will happen to them.

And yes, a teensy nod to master of atmosphere and horror, Stephen King’s THE SHINING where characters are trapped in a remote and snowbound hotel and become mercy to the psychological horror that descends on them.

3. A rural, isolated lodge is always a great place to start a suspenseful novel. How exactly did your characters all come to be at Forest Shadow Lodge?

The characters are invited for an all-expenses stay at the brand new, high-end, fly-in wilderness lodge and spa. They are lured by an offer to enjoy a ‘soft opening’, so to speak, where they can assess the accommodation and potentially negotiate lucrative contracts with the new lodge owners. Each guest runs a business that would be suitable for such an establishment. Each is excited by a possible lucrative contract. But not all is quite what meets the eye, of course.

4. Your story is told from multiple points-of-view as you take deep dives into the characters’ lives and histories. Does everyone have something to hide?

Don’t we all have something to hide? My characters in this book certainly do. Some of their secrets are more powerful than others.

5. Mason and Callie are two of the law enforcement responders that are trying to piece together exactly what happened at The Lodge. Tell us more about these characters and what makes them so good at what they do.

Mason Deniaud was a top homicide detective before relocating to the remote north for personal reasons. He lost a young son and a wife and he’s searching for a way to live, or exist, if not heal. Callie Sutton is a young mother who is single, but also isn’t because her husband lies in hospital and is brain dead. Her husband is there, but he also isn’t there for Callie and her young son. Like Mason, she’s in limbo, a place where she can’t move forward, or back. It’s through this they find a bond. And the search for the missing lodge party pushes them together.

6. IN THE DARK is a pivotal novel in your career. What does it have in common with your previous writing and how is it different? How does this inform your next steps as a writer?

Pivotal sounds cool. I’ll take it! Thank you. But yes IN THE DARK is a bit of a departure from my previous romantic suspense books. If readers enjoy it, however, and if my publisher remains happy, I’d like to keep growing in this direction. But I do think my crime stories will always revolve around strong women, or women who might be victims to start with, but who find agency and take back their lives and become strong and survive through the arc of a story. (As with my forthcoming work IN THE DEEP). I do love to include a relationship element in my crime novels, but bonding with a potential love interest comes out of the personal growth of the protagonist. I like to tell—and read—stories of women who find ways to rescue themselves.

The promise of a luxury vacation at a secluded wilderness spa has brought together eight lucky guests. But nothing is what they were led to believe. As a fierce storm barrels down and all contact with the outside is cut off, the guests fear that it’s not a getaway. It’s a trap.
Each one has a secret. Each one has something to hide. And now, as darkness closes in, they all have something to fear—including one another.

Alerted to the vanished party of strangers, homicide cop Mason Deniaud and search and rescue expert Callie Sutton must brave the brutal elements of the mountains to find them. But even Mason and Callie have no idea how precious time is. Because the clock is ticking, and one by one, the guests of Forest Shadow Lodge are being hunted. For them, surviving becomes part of a diabolical game.

Read an Excerpt from In the Dark:

“The gas stove and the gas water heaters work,” Nathan said. “And there’s plumbing.” He turned his back on them and busied himself taking mugs out of the cupboard in an exaggerated fashion. His heart hammered in his chest. Sweat prickled across his lip.

Bart frowned. “Well, at least we won’t go hungry.” He made for the living area, paused. “I found a path. It looks like it leads around to the other bay, but it was getting too dark to follow without a flashlight.”

“Do you think it might lead to the real lodge?” Steven asked.

Nathan blinked. It was like the doctor was reaching for straws by asking—as if hoping, still, that their pilot had just made some terrible screwup with the GPS coordinates.

Bart said, “We can check again in the morning to see if—”

“There is no real lodge.” Jackie appeared in the doorway that led from the great room into the kitchen.

They all turned to look at the solid woman with intense eyes.

“This is no mistake,” she said curtly. “This is a con, some sick game.”

“What do you mean?” Bart asked.

“Did you guys not see the plaque outside, next to the front door? This place is called Forest Shadow Lodge. As in Forest Shadow Wilderness Resort & Spa. Here, look at this.” She pulled a brochure from her pocket and smoothed it out on the kitchen island.

“I printed it off the website before I left home.” She jabbed a photo of the luxury lodge. “It’s fake. It’s photoshopped, because it’s using the same location. See this bay here? And the shape of this one here? This mountain? This is how the terrain looked from the air. It’s this spot, but someone has photoshopped the spa into the location. They’ve erased parts of the forest, added cabins and trails, plus interior shots from some other spa and lodges.” She met their gazes. “This whole thing was faked from the get-go. We were lured here. All of us. And now we’re trapped.”

A sinister cold seemed to enter the kitchen. A shutter banged upstairs, and wind whistled. Mist, cloying and wet, pressed up against the windows. It grew darker inside.

“God knows.” Jackie dragged her hand over her hair. “But right now, we’re stuck. We’ve been baited and lured into some weird kind of wilderness prison.”

“We are not trapped.” Stella entered the kitchen. “We have a plane. And you guys have a pilot—me. We have fuel. We—”

“We have no bloody radio!” Jackie snapped, whirling round to face Stella, her eyes furious.

“Go on. Tell them. The radio is broken. Sabotaged, wires cut.”

“But I heard you speaking to your dispatch on the radio,” Nathan said.

“But it wasn’t working, was it, Stella?” Jackie said. “Your dispatch couldn’t hear you, could they? No one even knows where we are, do they?”

“So when were you going to tell us this, Stella?” Steven asked.

“I didn’t want to say right away. Fear, worry, is not a good thing when—”

“When what? Jesus. Who are you to decide what’s right and wrong for us to know?” Steven barked. “You’re just the pilot, not the boss of our lives, for Chrissakes.”

“There’s a chance I could fix it in the morning. If I can—if it’s an easy fix—you’d never have to have known about it.”

“So you thought you’d play God?” Steven snapped. “Because we would all panic.” He wagged jazz hands at the sides of his face.

“And you’re not panicking?” she said.

Silence swelled in the kitchen. It felt for a bizarre moment as though the house was listening. Alive. Hostile. Nathan felt hairs rise along his arms. He was sensitive to these things. He could feel trees in the forest watching and listening to him. 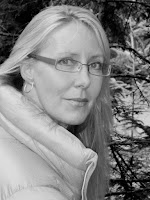 Loreth Anne White is a bestselling author of thrillers, mysteries, and romantic suspense. A three-time RITA finalist, she is also the recipient of the Overall 2017 Daphne du Maurier Award, the Romantic Times Reviewers’ Choice Award, the National Readers’ Choice Award, and the Romantic Crown for Best Romantic Suspense and Best Book Overall. In addition, she’s a Booksellers’ Best finalist and a multiple CataRomance Reviewers’ Choice Award winner. A former journalist who has worked in both South Africa and Canada, she now resides in the Pacific Northwest with her family. When Loreth isn’t writing, you will find her skiing, biking, or hiking the trails with her dog (a.k.a. the Black Beast) or open-water swimming. She calls this work, because that's when the best ideas come.

a Rafflecopter giveaway
at 11:03 AM