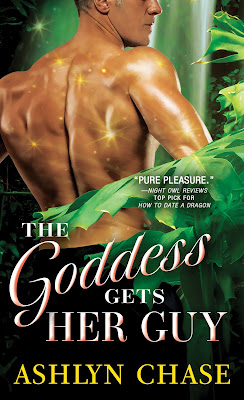 The Goddess Gets Her Guy

What happens when the goddess meets Mr. Right…but she absolutely can’t tell him who she really is?

After leaving his job as a cardiac surgeon, Dr. Aaron Samuels needs a new purpose in his life. Wanting to help his patients even if he can’t operate, he heads to the Puerto Rican rainforest to find a cure for heart disease. He never imagined he’d meet a beautiful, mysterious woman, especially not one talking to a frog in the middle of the jungle…

Gaia—a.k.a. Mother Nature—has had it with paranormals breaking her number one rule: Never reveal your supernatural powers to humans, not even your mate. Fed up, she transports to the rainforest, happy to converse with amphibians who don’t talk back. But Dr. Samuels is a much better conversationalist, and Gaia can’t wait to help him mend all those broken hearts he told her about.

When her attempts to help only complicate things between them, Gaia begins to wonder what would happen if she opened her heart and was honest with Aaron…and herself. Maybe her number one rule has been wrong all along…

“A sexy and fun paranormal romance.”—Booklist for My Wild Irish Dragon

“Hot and hilarious. This one is a must-read.”—Night Owl Reviews Top Pick for Never Dare a Dragon

“Shapeshifting done right!… This fast-paced romance is a must-read.”—RT Book Reviews for Hooked on a Phoenix

“Funny and sexy...a different twist on the average paranormal theme.”—Fresh Fiction for Kissing with Fangs

An award-winning author, ASHLYN CHASE specializes in characters who reinvent themselves, having reinvented herself numerous times. She has worked as a psychiatric nurse, and for the Red Cross, and has a degree in behavioral sciences. She lives with her true-life hero husband in beautiful New Hampshire.

Karma lifted her sunglasses. “How goes the challenge of the century, Sister?” She stretched her long legs over a lounge chair next to her private pool.

“More like the challenge of the millennia.” Fate plopped herself on the lounge chair beside her.

“I referred someone to you.”

“No. Why? Did someone else send him?”

“I doubt it. He said he heard rumors and wanted to volunteer.”

Karma laughed. “What did you say?”

Fate sighed. “A resounding ‘Thanks, but no thanks.’”

“Good. I’m not sure he has ever made up for that horrible practical joke he pulled in the sixteenth century.”

“I confronted him on that. He seemed to think the whole thing was wildly exaggerated, and it may have been. You know writers…if the truth isn’t quite dramatic enough, they’ll embellish it. But he did give me something to think about. Instead of trying to find someone with opposite faults, I should be looking for someone with common interests. Faults can be overlooked if you’re happy and living a better life because of your mate.”

“Exactly true. Is that what you were doing? Looking for someone who is basically a saint?”

“Hon, our sister is so riddled with faults, I can’t think of anyone with opposing assets.”

Fate let out a huge sigh.

“I’m in need of hydration. If you want something else, get it yourself.”

Fate snapped her fingers and held a sparkling orange mimosa. “Some hostess you are.”

“I’m not hosting a party, Sister, and if I were, you’d be crashing it. I was just lying here, enjoying the sun. Alone.”

Fate rose. “Well, pardon me. I didn’t realize I needed an engraved invitation to come to you for support.”

Karma waved away her remark. “Sit back down. Of course I’m here for you if you need a shoulder to cry on.”

Fate shook her head. “Unbelievable. I’m not in tears. I just thought two heads would be better than one.”

“So you’re rethinking my offer to help. Hey, if you want me to come up with a list of assholes to punish by setting them up with her, I can help you and myself both.”

Fate laughed. “Yeah, right. Like any of our gods wouldn’t see that coming.”

“What are you suggesting? A human who knows nothing of the paranormal world? That’s exactly what she doesn’t want.”

Karma shrugged. “Well, it’s either that or a paranormal. Flip a coin.”

Fate was about to laugh until she realized Karma might be onto something. There were plenty of men, both human and paranormal, who could give Gaia a run for her money—so to speak. And some knew about gods and goddesses, even worshipped them.

“Most men would cower from her, but there are a few with the self-confidence to stand up to her and not crumble when faced with her abilities,” Karma was saying.

“Perhaps…” Fate tapped her lip as she mentally ran through a list of men she’d destined for greatness but whom she hadn’t found mates for. There weren’t many. “Is there any world leader without a mate?” Fate asked.

“None who actually deserve one at the moment.”

“How about someone smart and selfless? Do you know of any heroes with very high IQs?”

“Aren’t those two things antithetical? How smart is it to run into a burning building or sacrifice yourself in another way?” Karma asked. “We’d be back to square one.”

Fate snorted. “Well, there goes the only suggestion the modern muses came up with.”

Karma gave a slight shrug. “Gaia isn’t all bad, you know. In fact, deep down, she has some very positive traits.”

Fate snickered. “Must be deeper than I’ve ever looked.”

Aaron wandered aimlessly around his large living room. He had immediately retired from the Boston hospital where he’d worked for thirty years as a cardiac surgeon. Kind of necessary since he’d been diagnosed with essential tremors. At last, he dropped into his favorite chair, and as soon as he did, his black-and-white cat jumped onto his lap.

“Hi, Cat. I’m sorry we never gave you a more imaginative name, but you came when Ruthie called, so in a way, it’s your fault.” He scratched behind the cat’s furry ear, and the feline began to purr. On the housekeeper’s day off like this, he had no one to talk to but his cat—not that he talked to Mrs. Rivera very much. He had to keep his family’s magical witch power a secret, and it was easier to do if he didn’t communicate much with people who had no knowledge of magic and the paranormal.

“Can I confide in you, Cat? Of course I can. You won’t tell anyone, will you, boy?” He sighed deeply. “My hand trembled during a transplant. I can’t afford to nick an artery if even one finger trembles.”

He ran his currently steady hand over the cat’s soft back. “I have a beautiful million-dollar home in Brookline, but what’s a home without a family in it? No offense. You’re part of the family, but you don’t take up much room. What are we doing here?”

He answered, “I’m talking to myself. That’s what I’m doing.”

He let out a huge groan. Despite feeling odd about it, he continued his musing aloud. “My wife died two decades ago. You weren’t around then. I’ve raised my daughters, and they’re both living their own lives in their own homes, starting families. My nest is empty. Again, no offense. We’ll call it empty-ish.

“I miss my daughters, who I could talk to frankly about our Wiccan roots. I have one useless power. The power of invisibility.” He chuckled bitterly. “I might as well be invisible right now. Couldn’t have gotten a useful power, like my girls’ power to save one life a day with supernatural intervention.”

Cheek resting against his fist, he thought about how pathetic he seemed. He couldn’t stand being this way. He hadn’t told anyone about his diagnosis. “Maybe it’s a good thing they’re not here. The girls would worry, and I don’t want to burden them.