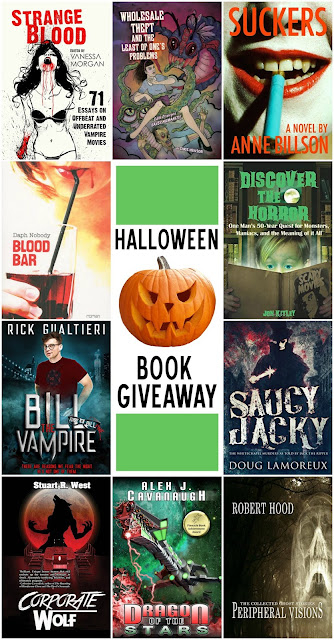 Who doesn't want to dive into a good, creepy book this time of the year? With Halloween around the corner, we're giving away ten books, written by the contributors of Strange Blood: 71 Essays on Offbeat and Underrated Vampire Movies edited by Vanessa Morgan (released April 2019).

From vampires and werewolves to ghosts and serial killers, these terrifyingly brilliant books will have you enjoy the creepy season that much more.

You can win all of them by filling in the Rafflecopter at the bottom of the page. The giveaway is open worldwide, and ends October 31st, 2019. Good luck!

This is an overview of the most offbeat and underrated vampire movies spanning nine decades and 23 countries.

Strange Blood encompasses well-known hits as well as obscurities that differ from your standard fang fare by turning genre conventions on their head. Here, vampires come in the form of cars, pets, aliens, mechanical objects, gorillas, or floating heads. And when they do look like a demonic monster or an aristocratic Count or Countess, they break the mold in terms of imagery, style, or setting. Leading horror writers, filmmakers, actors, distributors, academics, and programmers present their favorite vampire films through in-depth essays, providing background information, analysis, and trivia regarding the various films. Some of these stories are hilarious, some are terrifying, some are touching, and some are just plain weird. Not all of these movies line up with the critical consensus, yet they have one thing in common: they are unlike anything you've ever seen in the world of vampires. Just when you thought that the children of the night had become a tired trope, it turns out they have quite a diverse inventory after all.

Discover The Horror: One Man's 50-Year Quest for Monsters, Maniacs, and the Meaning of it All by Jon Kitley (paperback)

For over five decades, Jon Kitley has been on a never-ending quest to explore as much of the horror film genre as possible, from the early days of terror television to movie theaters and drive-ins, from the video explosion to the creation of his long-running website. Now, for the first time, fans of Kitley's Krypt can read how it all started (and continues to this day) as Jon shares his personal "tales from the road" experiences, having attended over a hundred horror movie conventions from coast-to-coast, as well as thoughts on different sub-genres, critics, reference books, and so much more. Plus, discover plenty of tips on how YOU can get the most out of your own journey into Monsters, Maniacs, and the Meaning of it All!

Focusing on sexism, B-movies, and the Golden Age of Hollywood, Wholesale Theft is about the adventures of Edith Donnegan, a young woman who invariably finds herself up against killer robots, mad scientists, and lizardmen. All the while, she has to deal with incessant chauvinism for the most absurd of reasons, but she strives to succeed.

The Key in the Grave: A haunting in a feared old mansion catches the attention of Edith, who decides to play amateur ghost-hunter to discover what happened in the past, and what’s happening now.

Empire of the Future: While on holiday to Luxembourg, Edith witnesses the world change into a bizarre hybrid of past and future technology. If she wants any chance of getting back home, she’ll have to stop a power-mad ruler before the changes are permanent.

Undead Teenagers of the Lost Island: On an uncharted island, mysterious and dastardly experiments threaten a group of visiting teenagers. Can Edith rescue them in time from the clutches of a villainous mad scientist?

It was supposed to be a corporate retreat and a series of morale-boosting exercises. It was a weekend Shawn Biltmore nearly didn't survive.

There was something else playing in the woods that night, something other than a bunch of corporate drones with paintball guns.

And it had chosen Shawn as its new chew toy.

The local authorities chalked it up to a bear attack.

So did the doctors.

Shawn knew the truth, however, as much as he wanted to deny it.

But when one of his coworkers is viciously killed, Shawn must face the truth…

He's a killer who needs to be put down.

There are reasons we fear the night. He’s NOT one of them.

Bill Ryder was a dateless geek, but then he met a girl to die for. So he did. Sadly, that was just the beginning of his troubles. He awoke as a vampire but, fangs or not, he was still at the bottom of the food chain.

Now he finds himself surrounded by creatures stronger, deadlier, and a hell of a lot cooler than he is ... and they all want to kick his ass.

Bill isn't exactly average, though. A vamp like him hasn't been seen in centuries. He's got a few tricks up his sleeve, unlikely allies, and an attitude that makes him too damned obnoxious to quit.

Join him in this hilarious tale of bloodthirsty monsters and the unlikely hero who's not afraid to flip them all off, even if it gets him killed – again.

Dragon of the Stars by Alex J. Cavanaugh (ebook)

The future is set for Lt. Commander Aden Pendar, son of a Hyrathian Duke. He’s poised to secure his own command and marriage to the queen’s daughter. He’ll stop at nothing to achieve his goals.

But when the Alliance denies Hyrath’s claim on the planet of Kavil and declares war on their world, Aden finds his plans in disarray. Entrenched in battle and told he won’t make captain, Aden’s world begins to collapse. How will he salvage his career and future during Hyrath’s darkest hour?

One chance remains – the Dragon. Lost many years prior, the legendary ship’s unique weapon is Hyrath’s only hope. Can Aden find the Dragon, save his people, and prove he’s capable of commanding his own ship?

And some of us saw it in our nightmares…

Anne Billson's debut novel, described by Christopher Fowler in Time Out as 'dark, sharp, chic and very funny', is set at the end of the 'greed is good' era, and features a gothic love triangle between a man, a woman and the 300-year-old vampire they chopped into pieces a decade earlier.

But now she's back, and this time she's building a bloodsucking empire...

Saucy Jacky: The Whitechapel Murders as Told by Jack the Ripper' by Doug Lamoureux (audio book)

Walk the streets of Whitechapel and slums of Spitalfields, side by side with history's most notorious serial killer.

Overhear his plans, and listen - or try not to - to his secret thoughts as he waits in the shadows. Keep pace, if you have the nerve, as he stalks his victims.

Watch, if you have the stomach, as he commits his outrages. And run with him, if you're still upright, as he escapes the swarming forces of police desperate for his hide and head.

Imagining the unimaginable in this unabashed novel of terror, award-winning author Doug Lamoreux takes you inside the mind of the infamous killer who was never caught.

Discover the Whitechapel murders...as told by Jack the Ripper himself.

In a close future, blood has become a valuable beverage. A "new world" guru named Borderman has built up a business on this fluid flowing in every man’s veins. During a long drought, as water is missing everywhere, blood becomes the core of a "golden rush". People kill for a single drop of water or blood. After being raped by a bunch of men who introduced themselves as water sellers, Alna loses her mind and eventually commits suicide. Years later, her husband Jooze, old enough to feel death getting closer, wants to take revenge as a final shot before dying: he will find back those men and kill them all! On his way, he will meet a little girl who was genetically conceived by the government to be exclusively fed with blood. A magic encounter, so to speak! He will use her as his ultimate weapon. But a dark man called Bob Wayne is chasing them both, whose mind is driven by cruel desires and insane projects…

Peripheral Visions is a unique reference collection that includes all of Robert Hood's 44 ghost stories to date, three of them especially written for this volume. These memorable tales display Hood's uncanny ability to make the fantastic real, to embrace weirdness and create human characters whose lives – both inner and outer – haunted by mortality, are laid bare and revealed to be our own worst nightmares. Ranging from melancholy reflection on life and death, through disquieting tales of dark humour and vengeance, to chilling visions of ghostly apocalypse. Hood's stories are sure to draw you into a terrifying world that in the end is revealed to be irrefutably our own. Though many of these stories draw on the traditions of the past, they are far from traditional in approach.

As you turn each page remember this: not everything here is as it seems. There's always something more, barely glimpsed, out there on the periphery.

Each section has an evocative, disturbing illustration by noted artist, Nick Stathopoulos.

a Rafflecopter giveaway
at 7:20 PM