The Writing Process by Dan Jolley, Author of The Storm ~ @_DanJolley ~ Suspense Thriller


I get asked about the writing process, and about the best advice I can give to writers, on a semi-regular basis. I’ve basically boiled it down to four rules. (I can, and will, go on at unreasonably great lengths about each of these three if prompted, but for now here’s the bare bones.)

RULE #1: Never go back and read what you’ve written until you’ve finished an entire draft.

RULE #2: Give yourself permission to write a terrible first draft. First drafts are supposed to be terrible. It’s not a big deal. You can fix it once it’s done.

RULE #3: If you’re writing any kind of serialized work – a comic book series, a novel series, a webcomic, anything that keeps going – recognize that your characters are more important than your plot.

RULE #4: Get a good editor. Every writer needs an editor. No exceptions.

Expanding on Rule #3, one of the things I encourage aspiring writers to do, either purely as an exercise or by way of creating characters they’ll use in a story, is to base a fictional character on someone they know in their real life.

I’m not talking about just taking inspiration from someone you know, or using a couple of features of their personality. I’m talking about launching into a serious, meticulous study of this person, analyzing their personality, their speech patterns, their likes and dislikes, the way they walk – everything. It’s a little bit like an art student recreating a painting by one of the masters. If you can re-create someone you know on the page, convincingly enough that someone else who knows that person can recognize them by what you’ve written, then you’ve succeeded in the exercise.

I advocate for this because it gets you in the habit of considering every aspect of a character. It’ll help you avoid the pitfall of coming up with a protagonist whose single defining characteristic is, for example, “angry.” Instead, you’ll think about your original characters, ideally, with as much depth and nuance as you used to mimic the person you know.

Perry is eleven years older than Zandra. Clint is eleven years older than I am. What that meant was that when I started second grade, Clint started his first year at Georgia Tech. He was a larger-than-life figure to me when I was a kid, and I’ll readily admit that I basically worshipped him as a hero. Everything Clint was into, I was into, in a big way (except for math – he’s an engineer, and I’m, uh, very much not).

Clint read science-fiction and fantasy novels, so from the time I could read, I tore through all the Larry Niven and Robert E. Howard I could get my hands on. (Not to mention Fritz Leiber and Poul Anderson and Ursula K. Le Guin and Harry Harrison and… I should stop, or this post will just turn into library listings.)

Every time Clint came home from college, he’d bring me a big Xerox paper box filled with comic books. We were not collectors; these comics were just thrown into the box loose, bent and curled and squished. But I read each and every one hundreds upon hundreds of times, and fell in love with Iron Man and Batman and Wonder Woman and Spider-Man.

Clint discovered Dungeons & Dragons in college. He would be the first to tell you that it became a bit more of a distraction from his studies than he wanted, so eventually he brought all his D&D stuff home and left it with me. And I ended up basically memorizing the Monster Manual and the Fiend Folio and everything else I got.

Clint was the living embodiment of awesome to little grade-school me. I wanted to be him when I grew up, except of course that I had already figured out I couldn’t do math, so engineering was out. (I made the decision to become a professional writer at age 13, though, and haven’t looked back.)

But then, as I got up into high school, a funny thing happened. I started to get to know my older brother as a person. Not as my hero. Not as this demi-god who could do no wrong. But as Clint, a guy with a degree from Georgia Tech. Who got married at twenty-two. Who became an Industrial Engineer. As it turned out, he was not a demi-god. I discovered that he was a flesh-and-blood person who could make mistakes just as well as I could.

But as I went through college myself, graduated, and eventually became the guy-wondering-when-everyone-else-will-notice-that-he’s-just-pretending-to-be-a-grown-up you see before you today, a miraculous sort of thing happened. My brother, the former hero, former demi-god, became my friend.

A bit about my personality: I am introverted like you wouldn’t believe. (I know, I know — an introverted writer? The hell you say!) Part of that means that I’ve only ever had two or three close friends at a time. In fact, my brain has basically developed what I think of as “friend slots,” like the places on a motherboard where you can plug in extra memory cards. My brain’s friend slots are finite and low in number.

But now Clint occupies one of them. We can talk like equals. We can commiserate on the day-to-day minutiae of just living life. We can go to each other for advice.

In the last six months, our father has fallen terribly ill, and that’s a subject for a whole other post at some point. But Clint has been coming to visit from his home in South Carolina much more frequently, and he always stays with my wife and me, and that’s strengthened our friendship even more.

And it’s that friendship that I lifted directly from my own life and plugged into The Storm. No, Zandra isn’t all that much like me, and no, Perry isn’t really similar to Clint. But their relationship — the ease of it, the banter, the deep-seated mutual respect — came naturally to me, because I’ve been cultivating it with my own brother for the last several decades.

So, for a glimpse into a friendship that I value incredibly highly — set in a tense mystery-thriller that shines a light on some truly vile aspects of human nature in other characters — I invite you to check out The Storm. 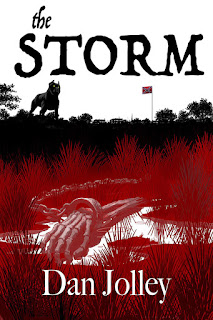 An intense tale that explores murder, mystery, and race relations in a rural area of modern day Georgia, The Storm delivers a captivating reading experience!

A tiny town in Georgia’s northwest corner — ninety-five percent white. Five percent black. Utterly unprepared for the devastating tornado that rips and smashes through it one dark August day.

SHERIFF ZANDRA SEAGRAVES already faced an uphill battle. Elected by a fluke, Red Springs’ first-ever black, female sheriff leads the recovery efforts, despite knowing how much the townspeople–and her own department–loathe her. But Zandra has no idea just how hellish things are about to get.

Because one of the relief workers stumbles across a ghastly secret: the tornado tore a long-abandoned house off its foundations, revealing a grisly, recently-used torture dungeon below it.

A monster has been dwelling in Red Springs. Undetected for years. Preying on the unsuspecting populace. His atrocities only brought to light because of the storm.

Now, amid the tornado’s wreckage and surrounded by people who want her gone, Zandra has to hunt this monster down before he disappears again.

And to do it, she’ll have to peel back all of Red Springs’ dark, corrupted layers. One vile secret at a time.

Dan began writing for video games in 2007, and has contributed storylines, characters, and dialogue to titles such as Transformers: War for Cybertron, Prototype 2, and Dying Light, among others. Dan lives with his wife Tracy and a handful of largely inert felines in northwest Georgia, and enjoys connecting with readers via his website (www.danjolley.com) and on Twitter (@_DanJolley).