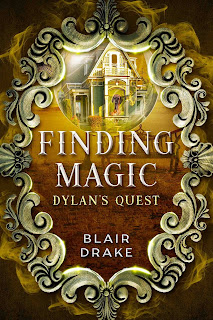 Tagline: What would you do to find your magic?
About the Book:

The most normal thing about Dylan’s morning was being called to the headmaster’s office. And that’s where normal forever changed for him. One minute he’s in the office, the next he’s on the roof, and moments later, he opens the doors to Gray Cliffs Academy to find he’s in a whole new world.

Troll, and pixies, and chameleman, oh my. In a dimension with real-world technology along with magic, Dylan must find his grimoire and get back to Gray Cliffs before the darkness invades both worlds.

Read an Excerpt from Book 5:

When Dylan opened the door, he thought maybe he was dropped off the roof onto his head and suffered a concussion. Nothing else, short of a dream (which he decided it wasn’t a dream when he pinched himself and it hurt like hell), could explain what he saw.

He stepped through the doorway and closed the doors firmly behind him, to keep the fog at bay. Turning around to what should be the foyer of the school, he saw a city. Was it a city? Could that be possible? And it felt familiar, only he was sure he never saw anything like it before now.

“Holy…” He didn’t finish his sentence because awe overtook him. He’d seen this place before. Not the whole place necessarily, but he’d seen that house. He looked to the left...and that house.

His father was an architect, and he had drawings and paintings of Victorian homes all around his office. But the homes were surreal, with blithely assembled gables, dormers, turrets, and finials. It was a surreal whimsy. His dad said he interpreted what he was taught about Stic, Eastlake, and Gothic Revival architecture. He always thought his dad reimagined and reinvented original architectural designs, but he drew real houses.

Dylan took a tentative step forward. What the hell happened? Where were the rest of the kids? And why wasn’t he terrified? Fog seeped through the seams of the door and clouded the vision before him. He could see this town was near the sea and thought maybe it was the other side of the island—or not.

He considered pinching himself again, because this had to be a dream. Only he looked down and saw the welt he gave himself moments ago. Not a smart idea. He’d roll with it. He stepped forward onto the sidewalk and was nearly run over by an egg-shaped man wearing what he’d call steampunk clothing: cream colored, high-waist Regency fall front trousers, a brown vest with a burgundy jacket with little round tassels hanging from the hem, a white cotton neck scarf with the same tassels, and tan and burgundy wingtip shoes.

The egg man walked on the tips of his toes while three cats, all tiger striped, walked with him. The three cats were on leashes. With his nose in the air, not paying attention, it was no wonder he nearly ran over Dylan.

Dylan started to say a sarcastic, “Excuse me,” but he was awestruck by what he saw in the street.

An elephant, wearing a hat and blanket the same colors of tan and burgundy as the round man, had a miniature version of the Taj Mahal strapped to his back. As the elephant walked past, Dylan could see two monkeys inside the Taj Mahal, playing chess.

Dylan shook his head. What happened on that roof? He looked around to see the streets were filled with other oddities: a woman who looked like a mermaid with legs, was riding a seahorse as if the air were water; a frog with wings; fish floating by in bubbles. And when he looked to the sky, he swore the crescent moon smiled at him, then winked.

He felt something hot in the pocket of his khaki school uniform pants and pulled out a pin. It glowed. It was warm, but not really hot, though it felt quite hot in his pocket, like it tried to get his attention.

“Hey,” he heard a muffled cry.

Looking around, he didn’t see anyone looking at him.

Just as he leaned over to see where the voice was coming from, a bee the size of a small dog swooped down at him. As it flew away, he saw it wasn’t just a bee. The insect had the upper body of a woman, with the butt and wings of a bee.

“Watch out, that one can kill you,” the voice said.

Dylan looked at the grass next to the sidewalk. A man’s pocket watch was wedged between the grass and the white picket fence. He bent down and picked up the watch.

“Whoa,” he said when he almost dropped it, after looking into the clear glass cover.

Instead of seeing the face of a watch through the glass, Dylan saw a man’s face, and his bare arms and legs. It looked as if he’d been stuffed into the pocket watch.

“Hey, be careful,” the naked old man inside the pocket watch said.

“Press the top and open this thing. I’m getting cramps.”

Dylan didn’t immediately open the pocket watch. He turned it over in his hand to look at the back. It looked like tarnished sterling silver, and it was old. But where were the watch parts? He’d have to open the glass watch face to see what was inside. How did that old man fit inside? And the man inside was talking to him. How had he heard such a small man, who was closed inside a watch?

Dylan could see the man’s face peaking from between his knees, which looked smashed against the glass. His legs were bent, and his knees were on either side of his body, with his ankles crossed. His toes were large and gross. He only had three fingers and a thumb on each hand. Dylan could see a cog embedded in the left side of his chest. He had a long, narrow face with a prominent chin, a wide nose, smallish eyes that were hard to see behind his goggle-like glasses, and no hair.

“You gonna stare all day, or are you gonna let me out?” he said, then yelled, “Let me out!”

Dylan’s fingers moved to the top of the watch and popped the cover open. It felt as if his fingers were moving of their own freewill, even though he tried to keep them from letting the little old man out. Something told him this old guy was trouble. T. R. O. U. B. L. E.

The man tumbled out and dropped to the grass. “Umph.”

Dylan blinked and when he opened his eyes, the old man was no longer small enough to fit into the watch. Dylan covered his eyes. “Dude, you’re naked. Your junk is hanging out for everyone to see.”

When he opened his eyes, the old guy had his hands over his crotch. “Sorry, I’m getting old. Things don’t always go the way I plan them.”

The old man did something Dylan didn’t see, and suddenly he was dressed in the same manner as the round man with the cats.

“Who are you? And where am I?” Dylan asked, now that he could comfortably look at the man.

“I’m Henry Gidiro, but my friends call me Hank.” He swept his hand across and in front of him, bowing deeply from his waist. When he stood again, he said, “And you’re the young and stupid Dylan Streetman.”

Dylan’s chin dropped, his mouth wide open. Just then, another bee swooped down at his mouth.

Henry moved faster than a comic character, closing Dylan’s mouth with one hand and swinging his other hand in the air to ward off the bee. “Nasty things.”

“How do you know my name, Hank?” Dylan mumbled through his closed mouth, because Henry’s hand was still on his chin.

“It’s Henry to you, and I’ve been expecting you. You’re uglier than I expected,” he retorted, pulling his hand away. 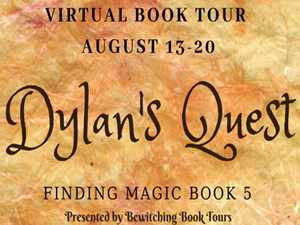