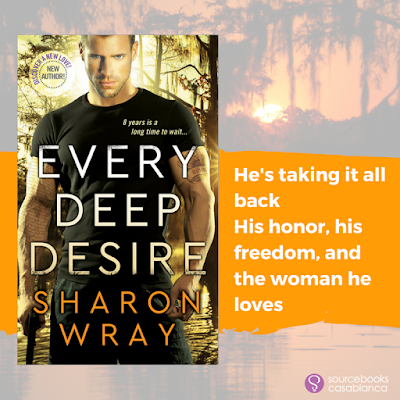 As an author, I both love and fear release days. I’m thrilled that the book I’ve spent years on is entering the world, ready to find readers. Yet terrified because the fictional world I’ve spent so much time in—dreaming about, thinking of, planning for—is no longer my own.

The story and everything in it, especially the characters, now belong to you. All the feels you experience, whether I intended them or not, will be filtered through your own life’s events. Your memories, your dreams, your joys, and losses will determine what you take away from the story. And that’s the way it should be.

Yet, while reader reactions are completely out of my control, it’s also scary. Especially when one makes changes to the genre. Every Deep Desire, and the other books in the Deadly Force series, are all romantic suspense stories—yet they’re also different. And we all know how the world feels about change.

The Deadly Force series is about a group of ex-Green Berets, under the command of Colonel Kells Torridan, who were charged with a crime they didn’t commit and dishonorably discharged despite their innocence. Some of the men from the unit are in prison, but the men in the series, including Kells, are living in Savannah, GA, managing Iron Rack’s, a run-down, pirate-themed gym in a not-so-nice part of town, and working as bouncers at a goth strip club. They’re hiding in plain sight, teaching Krav Maga classes, tossing drunks, desperate to find any information that can lead them to who destroyed their lives, and why.

But these books aren’t just about the men and their weapons. They are also romances. To be more specific, each love story is a retelling of one of Shakespeare’s greatest love stories. Just add in sexy, down-and-out Green Berets, dangerous arms dealers, and strong heroines who teach these alpha males that Grace always defeats Reckoning. <grin>

Every Deep Desire, a contemporary retelling of Romeo and Juliet and first in the Deadly Force series, is about Rafe Montfort and Juliet Capel. Rafe, a man in Kells’s unit, left his men and his wife to join the Prince and his Fianna army only to end up in prison. Now, eight years later, Rafe finds himself released without explanation. His only clue is a note telling him to return to the remote sea island off the coast of Savannah where he and Juliet grew up. It doesn’t take long for him to realize that his wife Juliet, the woman he’s adored his entire life, is in danger.

Juliet, a landscape architect, has struggled for eight years to recover from Rafe’s abandonment and disappearance. Their early marriage had been a disaster both their families had warned them about, but they’d been too young and too in love to understand. Now she’s determined to live her life on her own terms without help from anyone. And the last thing she needs is her ex-husband returning home with vague warnings of danger.

But when vague warnings become real threats, Rafe and Juliet realize that both of their enemies, the Prince and Remiel Marigny, know a 17th century secret about the Isle where they both grew up, a secret both of their families have kept for hundreds of years. Now, in order to figure out why an army of assassins, a brutal gun runner, and a team of ex-Green Berets are interested in Juliet’s ancestor—a Puritan woman accused of witchcraft—Rafe and Juliet must face their past together.

Now they’re running out of time. And not only is Juliet’s heart and Rafe’s freedom in jeopardy, the secret they uncover is far deadlier than anyone could’ve realized.

I hope you all enjoy this first book in the Deadly Forces series. It’s a world where sexy, smart heroines must teach these ex-Green Berets bent on redemption that physical strength and combat experience isn’t always enough to win. Sometimes a person’s greatest weapon—true courage—comes from seeking forgiveness and accepting love. 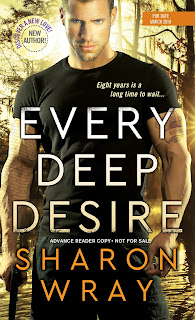 He's taking it all back
His honor, his freedom, and the woman he loves

Rafe Montfort was a decorated Green Beret, the best of the best, until a disastrous mission and an unforgivable betrayal destroyed his life. Now, this deadly soldier has returned to the sultry Georgia swamps to reunite with his brothers, and take back all he lost. But Juliet must never know the truth behind what he's done…or the dangerous secret that threatens to take him from her forever.

It took Juliet Capel eight long years to put her life back together after her husband was taken from her. Now Rafe is back, determined to protect her at any cost, and it's not just her heart that's in danger. The swamps hold a secret long buried and far deadlier than either of them could have imagined…

Juliet’s house had disappeared.
Rafe Montfort scrubbed a hand over his face. A strangling ache invaded his chest, filling the empty space that once held his heart. He shifted the Army duffel he’d shouldered for the past six miles, moving the burn from one arm to the other. Why had he assumed her father’s trailer would still be standing? That she’d be living there? Waiting for him?
Because he wasn’t only a bastard who made assumptions. He was a fool who once believed the Prince’s brutal goals justified Rafe’s ruthless actions.
Or, as Escalus used to say, “a fool whose violent delights have violent ends.”
Summer cicadas hummed in the Isle of Grace’s surrounding woods, their mournful drone filling Rafe’s head with rhythmic disapproval. Sweat soaked his T-shirt, pooling low in his back above his waistband. Where he used to keep his gun.
He wasn’t just a bastard. He wasn’t just a fool. He just wasn’t the man he’d once hoped to become. With a nod to his broken past, he left the overgrown property and headed home.
Keep it moving, Montfort. That’s right. One boot in front of the other.
He kicked an empty beer bottle into a ditch, shattering the brown glass, and marched toward Pops’s trailer tucked between the towering Georgia pines a half mile down the Isle’s dirt road. He’d given up his honor, his wife, his men. Thank God his mother had died before he betrayed everyone he loved. In the years he’d been away, he hadn’t just cut out his heart; he’d sold his soul.
Despite the breeze, questions about Juliet’s departure burned his blood.
Why had she left? He climbed the pine steps to the deck alongside the double-wide.
Where’d she go? He jumped the last two steps to avoid the missing planks.
Did she ever think of him? The Capels had arrived on the Isle long before the American Revolution. It’d never occurred to him that her family would leave. For eight long years, he’d been counting on that.
His duffel landed with a thud next to an outboard motor and buckets of fishing gear. He rubbed the knotted muscles in his shoulder and faced the broken screen door. His vision faded until all he could see was the blurry mesh.
What the hell was he doing? Why had he even come home? Because he’d had no choice. Everything depended on him remembering that. With renewed determination, he raised his fist and hit the metal door.
No answer. He closed his eyes, took another breath, and knocked again.
Juliet’s family was gone. Had his left as well?
He heard a banging around back, pulled out his leather jacket, and covered the tattoos on his arms. He’d rather die of heat stroke than start an argument. Then he jumped over the deck rail. His combat boots made it easier to walk through the tall weeds to the red barn a hundred yards behind the trailer. Three times larger than the home, the barn and surrounding yard held remnants of every American classic car ever made.
Everything stood as if he’d never left, except for the cell boost antenna on the barn’s roof. From the height and distance, it probably provided a cell signal the width and depth of Pops’s property. Pops had joined the twenty-first century? Maybe miracles were possible.
He drew closer and saw his daddy’s gray head bobbing up and down beneath the hood of a black 1958 Chevy Impala. He stopped on the other side of the car and exhaled until his lungs ached. “Pops?”
His dad raised his head, his eyes squinting. “Who’s there?”
“It’s me. Rafe.”
A man, shorter than he remembered, stood. In a stained red T-shirt and overalls with one strap hanging down, his father waited a few moments before nodding. At least he wasn’t holding a beer. Or his shotgun.
Rafe waved at the car. “She’s a real beauty. She yours?”
“No.” Pops wiped his dirty hands on an oily rag, and Rafe focused on the remaining finger on his father’s right hand. He’d given the other four to the Marines. “She belongs to your brother.”
“Good for him.”
Pops tossed the rag onto the engine and gripped the side of the Chevy’s frame. His hard stare took in Rafe’s leather jacket in what had to be triple-digit heat. “What you doin’ here, boy?”
He held out his hand. A hug would only be an invitation to an ass-kicking. “The Army released me from prison.”
“Released?” His father picked up a dirty wrench, his face brown beneath a haircut the Corps would salute. “What the hell for? Good behavior?”
“No, sir.” He dropped his hand. If disapproval were a color, it would be the dark, muddy brown in his father’s grim gaze. “I don’t know why.”
Since he’d spent two years in a Russian jail and then the last nine months locked in isolation in Leavenworth, he wasn’t sure what to think. “I was told to return to Savannah and wait for a call.”
While it went against every one of his hard-earned instincts urging him to run, he’d come home to find out what the hell was going on. Besides, it wasn’t like he had anyplace else to go.
“You still a sergeant?”
A sharp ache hit Rafe’s back molars, and he eased off the teeth grinding. On his left, he noticed a band of magnolia trees surrounding a white glory cross. He shoved his hands into his jacket pockets and forced himself to meet his father’s reproach. “I don’t know what I am.” Sergeant? Prisoner 061486? The Prince’s warrior? Hell if he knew.
“I know what you are,” Pops said. “Damn traitor. Not to mention adulterer, liar, thief.”
Rafe’s exhale sounded more like a hiss. While he wasn’t all of those things, he’d done other things—worse things. “I was also dishonorably discharged.” 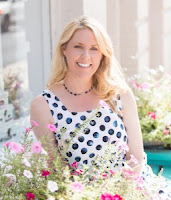 Sharon Wray is a librarian/archivist who studied dress design in the couture houses of Paris and now writes stories of adventure, suspense, and love. She’s a three-time Daphne du Maurier® winner and an eight-time RWA Golden Heart® Finalist. She lives with her super-hero husband and teenage twins in Northern Virginia. Website | Twitter | Facebook | Instagram