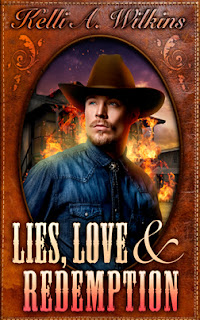 One day, I was thinking about nothing in particular when this popped into my mind:

A man limping along the prairie. He’s been shot and left for dead. He’s bleeding and hurt bad. And thirsty. So thirsty. It’s hot and he wants to rest, but he knows he has to push on. If he collapses again, he’s not going to get up and he’ll die here. But maybe he’s already dead and this is hell. Or maybe not...

That was my introduction to Sam, the hero from my historical western, Lies, Love & Redemption.

That was also how I introduced readers to Sam—lost and hurt and wandering along the prairie.


Here’s the book summary that came from that initial idea:

Shot and left for dead, Sam Hixton stumbles into a general store on the Nebraska prairie and collapses into the arms of Cassie Wilcox.

Cassie’s world is turned upside down when the handsome stranger drops into her life. Sam is another complication she doesn’t need: her business is dying and her trouble with the townspeople is escalating. Yet she’s determined to keep the store open — no matter what the cost.

As Sam recovers from his injuries, he hides the truth about his identity and convinces Cassie to let him work in the store. He’s attracted to her and admires her independent nature but quickly realizes Cassie’s in way over her head. They fight their growing attraction, and Cassie questions whether she can trust her fragile heart to a mysterious stranger. Will he accept her once he knows about her troubled past?

Cassie resists Sam’s advances and represses her feelings until one fateful night when they give in to their fiery passion. Together, they work out a plan to save the store but find their efforts are thwarted—and their lives endangered—by the locals.

Sam’s secret returns to haunt him and pulls him away just when Cassie needs him the most. Will he regain her trust when she learns the truth?

Cassie has everything invested in the store—can she save it and find true love with Sam before it’s too late?

***
Believe it or not, that first scene came to me several years ago. When I got the idea for the book, I did all the initial research and wrote a very rough draft. Then the manuscript just sat around. I’m not exactly sure why so many other book projects came ahead of it, but they did. The story was always there, but I guess I wasn’t ready to revise and edit it.

When I started working on the book again I found that although the basic premise still resonated with me, I wanted (and needed) to make a lot of changes. I always had the opening scene of Sam walking across the prairie in my mind. I knew where he was going (to Cassie’s store), and I had the general idea of how the story would play out and who the characters were, but I didn’t have the specifics of each scene.

As I got further into revising the book, the details became more solidified. I added new scenes, deleted others, and generally gave it a complete makeover. Now it’s a much stronger (and better) book than it was originally.

But before I started writing, I did a lot of research. First, I had to decide when and where the book would take place. I knew it would be on the prairie somewhere (Kansas? Nebraska? Iowa?) and set after the Civil War. Once I picked a time period and a place I researched everything I could about it: what was going on in the country at that time, how people traveled, what their occupations were, what they ate, how a general store was set up…

I enjoy reading about history and exploring what life was like in different time periods, so doing the research part of a historical romance is interesting—but time consuming. I was always scribbling notes about details I could use in the book. I never used them all, but adding realistic details helps draw readers into the world of the characters, even though it might be very different from how we live now.

Although I have written a lot of historical romances, the time periods are always different. I’ve used Medieval (A Most Unusual Princess), Scottish (The Viking’s Witch) and Colonial (Dangerous Indenture) settings. When I’m writing a historical romance, I never know when (or where) the characters will take me. Lies, Love & Redemption is set on the Nebraska prairie in 1877 and blends a steamy romance with mystery and danger.

Cassie dusted off a can of apricots and restacked it on the shelf. “Why do I even bother?” she muttered as she picked up the next can.

Another week had come and gone, but her days were always the same. Get up at dawn, sweep out the store, dust off the cans, and . . . wait. Her few customers strolled in on Saturday and Sunday afternoons to buy odds and ends, but nearly everyone bought their bulk goods at the general store in Baxter. Townsfolk came here only when they wanted something quick—or on credit.

The bell above the door jangled, but she didn’t bother to turn around. “That you, Luke? You’re up early. I bet you haven’t seen this side of ten o’clock in—”

She glanced over her shoulder and shrieked. The can of apricots slipped from her hand and rolled across the floor.

A stranger covered in blood leaned against the doorjamb.

She rushed to his side. “Who are you? What happened?”

The man locked his blue eyes onto hers. “Help me.”

He held a battered leather satchel out to her. “Hide this,” he said, then collapsed forward.

Cassie caught him around the waist and eased him to the plank floor. Was he dead? She felt the side of his sweaty neck. His heart was beating, but he looked like hell. His clothes were coated in blood and dirt, and his face had a sickly white hue to it. He was lucky to be alive. Someone had shot him full of holes.

Where had he come from? Holloway was in the middle of nowhere with no railroad connection, and it wasn’t on the stagecoach line. She hadn’t heard a horse out front, and he couldn’t have walked here from Baxter, could he? That would be suicide.

Wild ideas raced through her mind as she stared down at him. Maybe he was a fugitive or a bank robber. Decent people didn’t get themselves shot for no reason. Whoever shot him could’ve been following him, looking to finish him off.

Her gaze settled on the satchel. What was in it? Money? Gold? The deed to a silver mine? Why did he want her to hide it?

Cassie brushed her hair away from her face and frowned. What the hell was she supposed to do with him? Why had he wandered into her store, of all places? The last thing she needed was a half-dead stranger complicating her life. His being here would only stir up trouble—and she already had more than she needed.

Maybe she could— With a start, she realized he hadn’t moved. She shook his bloodied left shoulder.  The man remained motionless. “Damn it to hell.” She yanked the satchel from his grip, then ran behind the counter and stuffed it in the bottom drawer. There wasn’t time to look inside and see what the stranger was hiding. Whoever he was, he needed help—fast.

Links to other platforms: http://medallionpress.com/books/lies-love-redemption/
***

I hope you enjoyed this inside look at the making of Lies, Love & Redemption. I welcome comments and questions from readers. Be sure to follow my blog for the latest updates and visit me on social media!

All through November I'll be highlighting my Medallion Press historical romances on my blog and Facebook pages. These full-length romance novels are available on several ebook platforms and all are just $2.99. If you haven’t read any of them, why not give them a try?

And… FREE READS from all of my romances (all genres) are now on my Manic Readers page: http://www.manicreaders.com/KelliAWilkins/

Kelli A. Wilkins is an award-winning author who has published more than 100 short stories, 19 romance novels, and 5 non-fiction books. Her romances span many genres and heat levels.
Her paranormal-comedy, Beauty & the Bigfoot, was published in September 2017.
Kelli released Trust with Hearts, a contemporary romance, in July 2017. Her third gay romance, Four Days with Jack, was released in June 2017. Kelli’s trilogy of erotic romance novellas, Midsummer Night’s Delights, Midwinter Night’s Delights, and Ultimate Night’s Delights was published in spring 2017.
Loving a Wild Stranger was published in January 2017. This historical/pioneer romance is set in the wilds of the Michigan Territory and blends tender romance with adventure.
Kelli's third Medallion Press romance, Lies, Love & Redemption was released in September 2016. This spicy historical western is set on the Nebraska prairie in 1877.
Her writing book, You Can Write—Really! A Beginner’s Guide to Writing Fiction is a fun and informative guide filled with writing exercises and helpful tips all authors can use.
Kelli posts on her Facebook author page: https://www.facebook.com/AuthorKelliWilkins and Twitter: www.Twitter.com/KWilkinsauthor.
She also writes a weekly blog: http://kelliwilkinsauthor.blogspot.com/.
Visit her website, www.KelliWilkins.com to learn more about all of her writings, read book excerpts, reviews, and more. Readers can sign up for her newsletter here: http://eepurl.com/HVQqb.
Here are a few links to find Kelli & her writings on the web
Amazon Author Page: www.amazon.com/author/kelliwilkins
Website: http://www.KelliWilkins.com
Blog: http://kelliwilkinsauthor.blogspot.com/
Newsletter sign-up: http://eepurl.com/HVQqb
Facebook Author Page: https://www.facebook.com/AuthorKelliWilkins
Facebook Contemporary Romances: https://www.facebook.com/Contemporary-Romances-by-Kelli-A-Wilkins-1965702023664339/
Facebook Gay Romances: https://www.facebook.com/GayRomancesbyKelliAWilkins/
Facebook Historical Romances: https://www.facebook.com/Historical-Romances-by-Kelli-A-Wilkins-1703805359922371/
Twitter: www.Twitter.com/KWilkinsauthor
Pinterest: http://www.pinterest.com/KWilkinsAuthor/
FREE READS from all of Kelli’s romances (all genres) are now on her Manic Readers page: http://www.manicreaders.com/KelliAWilkins/